We are less than two weeks away from Double Or Nothing and now it is time for the card to really get hammered home. This time around, that only includes one Owen Hart Tournament match, which seems like a drop compared to recent weeks. The Blackpool Combat Club is here though so let’s get to it.

Black has no time for Evil Uno to start so it’s off to Fuego, who gets taken down into a kneebar. Matthews comes in and stomps away but Fuego gets over to Uno to pick up the pace. Black tags himself back in though and the House cleans itself as we take a break. Back with 10 cleaning house but he can’t get the full nelson. Everything breaks down and Uno gets to kick King in the face over and over but a kick to the face sets up the Ganso Bomb for the pin at 9:20.

Post match Death Triangle comes out and unveils a House Of Black tombstone with DOUBLE OR NOTHING included.

Anthony Bowens has been injured and the Gunn Club promises a reunion when he’s healthy again.

FTR is down for a Ring Of Honor Title match against Roppongi Vice. Oh and they want the IWGP Tag Team Titles too.

That would be Killian Dain, formerly of NXT fame. Damo takes him down to start and hammers away inside, only to miss the Vader Bomb. A running knee and the C4 (Spears: “WARDLOW!”) finishes Damo at 1:38.

The Undisputed Elite teases a Fingerpoke of Doom once they get to the Owen Hart finals. Or they could do it seriously, which works for both of them. The Young Bucks also want the Hardys at Double Or Nothing.

Ruby Soho is on commentary and doesn’t seem to like Jericho. Statlander starts fast with a one armed gorilla press but misses a charge, allowing Velvet to tie her up in the rink skirt. We take a break and come back with Statlander taking her down but getting caught with the Final Slice for two. Statlander’s Blue Thunder Bomb gets the same and a wheelbarrow faceplant gives Velvet two more. Back up and Statlander clotheslines her down but can’t hit the Big Bang Theory. Instead Velvet counters into a rollup, which is countered into a rollup to give Statlander the pin at 7:35.

Post match the Baddie Section comes in for the beatdown and Ruby Soho’s save fails. Anna Jay comes in and grabs Mark Sterling’s crutch for the real save.

Mark Sterling, Tony Nese and Hookhausen are all training for Double Or Nothing. Danhausen is cranking on those one pound weights.

Here are the Men of the Year for a chat. They mock the end of the Inner Circle (Jericho: “That’s a low blow.”) and Scorpio Sky wants the TNT Title back from Sammy Guevara. We cut to Guevara, who breaks the title with a sledgehammer. Frankie Kazarian pops up to take over, leaving Sammy to kiss Tay Conti. Kazarian promises more violence.

Dante Martin and Matt Sydal like the idea of peace, love and pro wrestling. The Blackpool Combat Club doesn’t agree.

Here’s what is coming on various shows.

Jade Cargill is ready for Anna Jay at Double Or Nothing.

William Regal is on commentary. The Club jumps them to start and it’s Moxley getting two off a suplex to Martin. Danielson comes in for some forearms to the head as Regal sings the praises of cauliflower faces. Martin avoids a charge to send Moxley into the post and it’s off to Sydal to pick up the pace.

We take a break and come back with Martin cleaning house but missing the Nose Dive. Danielson catches him on top with the butterfly superplex, setting up the LeBell Lock. The rope is reached so Danielson starts kicking away at the ribs, but what looks to be a Hart Attack is broken up. Everything breaks down and Sydal hits a Meteora to Danielson on the apron. Danielson is up in time to save Moxley from the Nose Dive, leaving Moxley to hit a piledriver. That’s good for two, so Danielson and Moxley come in for the hard elbows. The Paradigm Shift finishes Martin at 12:05.

Result: Blackpool Combat Club b. Dante Martin/Matt Sydal – Paradigm Shift to Martin (12:05)
Post match, the Jericho Appreciation Society runs in to go after the Combat Club. Santana and Ortiz runs in for the big brawl to end the show.

Remember to check out my website at kbwrestlingreviews.com and head over to my Amazon author page with 30 different cheap wrestling books at:

Remember to check out Wrestlingrumors.net for all of your wrestling headline needs. 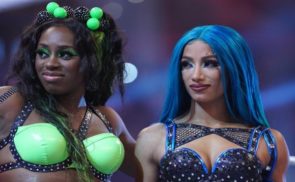 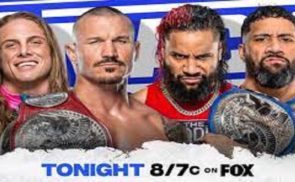