We are less than two weeks away from Forbidden Door and a bunch of matches were added to the card this week on Dynamite. I doubt that we get that much this time, but we do get Jade Cargill vs. Willow Nightingale. That should be a fun match and odds are we get something else on the same level. Let’s get to it.

William Regal is on commentary and calls Jericho a Trout Slapper. Moxley powers him into the corner to start as we talk about Zack Sabre Jr.’s comments about Bryan Danielson. They trade wristlocks into a headlock takeover from Moxley but Martin is back up with a dropkick out to the floor. Moxley runs him over again though and we take a break.

Back with Moxley hitting the running knee to the face and a butterfly superplex for two. Martin fights up and hits a quick ax handle, setting up a high crossbody for two of his own. The Nose Dive is countered into a rear naked choke but Martin climbs the corner for the escape. A super Sliced Bread gets two on Moxley and they strike it out until Moxley hits the running cutter. The King Kong lariat gives Moxley two and the hammer and anvil elbows rock Martin even more. Some kind of a choke with an arm trap and a bodyscissors makes Martin tap at 13:58.

Keith Lee isn’t happy with Swerve Strickland eliminating him from last week’s Casino Battle Royal but Swerve says it was a singles match instead of a tag match. Team Taz comes in to say Lee and Strickland still haven’t beaten them. Lee is rather silent.

The House of Black and Death Triangle are still ready to fight, this time in the All Atlantic Title tournament.

Caster’s rap is about having more people watching than January 6 and Vince McMahon’s affair. Caster and the Club jump them to start and we have the required three way scissor party. Austin stomps Ruff down in the corner and it’s the Quick Draw into the Mic Drop for the pin at 1:13.

Hook isn’t worried about facing a New Japan top prospect but Danhausen comes in to swear their destruction. Hook says he has this.

Cargill, with Kiera Hogan, is defending and Stokely Hathaway is on commentary. Cargill throws her down to start but Nightingale cartwheels her way out of a whip into the corner. There’s an enziguri to Cargill, who catches her in a fireman’s carry for some elbows to the face. What looked like a Pounce is countered by Cargill’s kick to the face, allowing Hogan to get in some stomps in the corner. Back with Nightingale knocking her into the corner for the almost required Cannonball. Cargill isn’t having that and faceplants her, setting up Jaded to retain at 6:04.

Post match the beatdown is on but Athena pops in for a Fall From Grace to Hogan. Cargill gets in a kick to the face but Kris Statlander runs in for the save.

Bobby Fish and Darby Allin are ready for the main event after Fish and Kyle O’Reilly injured Sting a few weeks ago.

Allin is so mad about Sting that he stops to pose on the ropes, allowing Fish to take him down. They head outside with Allin being driven into the apron, followed by a running charge through Allin. Fish hits the barricade though, allowing Allin to get back in and hit a dive. The running flip dive knocks Fish into the barricade as well but he’s right back on Allin’s legs to take over. A nasty dragon screw legwhip takes Allin down again and Fish takes him down again as we take a break.

Back with Allin getting in a shot of his own for a breather, setting up Code Red for two. Allin knocks him outside for a Coffin Drop to a standing Fish for the double knockdown. Fish is back up with a spear through the ropes and out to the floor again. They fight on the apron with Fish snapping off a German suplex, with Jericho begging Fish to end this. The super Falcon Arrow gives Fish two so he grabs the knee bar. Allin is fine with that, and reverses into the Last Supper for the pin at 11:45.

Post match Fish hammers on Allin again as Kyle O’Reilly comes out with a chair. Cue the returning Sting for the save, allowing Allin to Pillmanize Fish’s ankle. Sting is pleased to end the show. 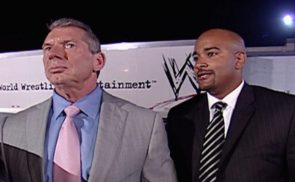