We are just over two weeks away from Forbidden Door but things have been shaken up pretty hard around here lately. A string of injuries has changed some of the direction in AEW but bringing in some of the New Japan wrestlers should help. That includes this week, as Will Ospreay/Aussie Open are teaming up to face FTR/Trent Beretta. Let’s get to it.

Kingston strikes away to start but Hager knocks him down with a knee to the ribs. Hager sends him outside before it’s back inside to crank on both arms. They’re already back to the floor with Hager pounding away, followed by some forearms in the corner back inside. The armbar goes on back inside but Kingston fights up. That doesn’t go well for Kingston, who gets chopped so hard that he takes down the straps. Kingston kicks him in the head to take over, only to walk into an overhead belly to belly.

We take a break and come back with Kingston getting in a shot of his own for the double knockdown. Kingston knocks him into the corner for the rapid fire chops but Hager hits him in the face. The Hager Bomb gets two but Kingston grabs a suplex of his own. Kingston’s spinning backfist is countered into a suplex, only to have Hager come back with the ankle lock. Hager’s right hands in the corner rock Kingston, who comes right back with a pair of spinning backfists for the pin at 11:24.

Kingston has to be helped out.

Britt Baker is so mad at Toni Storm that she calls Tony Schiavone a dumb***. She doesn’t like Storm touching the Owen Hart Title but more than that, she misses the Women’s Title.

Video on Ortiz vs. Chris Jericho in their upcoming hair vs. hair match.

Satnam Singh/Jay Lethal vs. Besties In The World

Lethal and Vega start things off but it’s already off to Singh. That means the chopping and tossing can begin, with Vega not having many options. Fitchett tries to come in but both Besties get crossbodied at the same time. Singh holds both Besties for a double Lethal Injection to give Lethal the pin at 1:39.

Danhausen was so proud of he and Hook winning at Double Or Nothing that they have bought matching golf carts. Hook arrives in his to give chase.

The other Baddies and Stokely Hathaway are here too. Velvet charges at her outside but gets powerslammed HARD on the floor, allowing Statlander to throw her inside for the opening bell. That leaves Velvet asking the Baddies for advice, which seems to be “CHOKE HER”. Not that it works as Statlander walks up the steps and then the corner before throwing Velvet inside. A high crossbody misses though and Velvet starts in on the leg.

We take a break and come back with Statlander hitting some shoulders to the ribs in the corner. Statlander powers up and hits a very spinning Blue Thunder Bomb for two. Something like a Michinoku Driver gets two but Velvet is back with a running knee to the back of the head. A spinning middle rope corner drops Statlander and Just Dessert gets two. Velvet’s spinning kick to the head is blocked though and Friday Night Fever finishes for Statlander at 8:55.

Miro is ready to hurt Ethan Page and win the All Atlantic Title.

Ethan Page says he looks up to and prays to himself so he is ready to wave the Canadian flag as he beats Miro next week.

The United Empire and FTR/Trent Beretta are ready for the main event and don’t like each other very much.

That would be Will Ospreay/Aussie Open (Kyle Fletcher/Mark Davis) with Aaron Henare for the Empire. Harwood takes Ospreay down to start but gets run over by a shoulder. Wheeler comes in and gets kind of hurricanranaed down, giving us a standoff. Wheeler gets taken into the corner and it’s off to Davis to toss Wheeler into the wrong corner. Trent comes in and hits a few chops as everything breaks down. The Empire is sent outside and Trent hits an Asai moonsault but comes up favoring his ankle.

We take a break and come back with Trent hitting an enziguri but getting knocked down again by Davis. Fletcher misses a running dropkick in the corner though and the hot tag brings in Harwood to clean house. Some clotheslines set up the rolling German suplexes to Fletcher and it’s off to Wheeler for a powerbomb.

Another German suplex into a jackknife rollup gets two but Aussie Open gets back up to beat Wheeler down. A toss into a cutter sets up Ospreay’s springboard 450 for two. The Oscutter gives Ospreay the same but Wheeler gets away and brings Trent back in. Everything breaks down and Ospreay hits a slingshot dive onto FTR. That leaves Davis to go after Trent, who catches Davis in Strong Zero for the pin at 13:57. 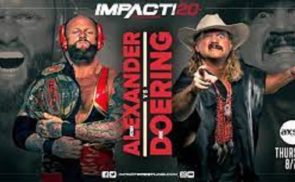 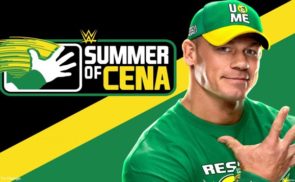