We are rapidly approaching Slammiversary and that means it is time to start filling out the card. The main event is set but we still need to add in a few more spots here and there. This includes another name in the Ultimate X match, plus a likely Moose vs. Sami Callihan match. Let’s get to it.

Madison Rayne is here too. Rosemary knocks her into the corner to start and a ram into the buckle makes it worse. Dashwood manages to get in a shot of her own though and pulls Rosemary outside for a crash to take over. Back in and the Upside Down doesn’t get Rosemary very far as Dashwood clotheslines her down.

A full nelson is broken up though and a double clothesline gives them both a breather. It’s Rosemary up first with something close to the Last Chancery but Dashwood slips out. Rayne offers a quick cheap shot but Rosemary grabs a rollup for the pin at 6:04 anyway.

Post match the beatdown is on but Taya Valkyrie comes in for the save. Rosemary and Taya don’t exactly seem to trust each other.

The Good Brothers have come to the Briscoes’ chicken farm and we get some rapid fire clips of them looking around the place, including dealing with manure, talking to Mark’s (I think) son and chasing around a chicken. Then they run into Papa Briscoe, who tells them to get out. Violence is teased but the Briscoe Brothers come in via their truck and the big fight is on. Jay gets tied in a tree, but Papa grabs a wrench to keep the Brothers (Good that is) from throwing a cinder block at his head.

Heath says Rhino needs surgery and will be out for months. Revenge on Honor No More is promised.

PCO starts fast with a running clothesline and somehow winds up on the floor instead of Maclin. A dive takes Maclin down and PCO’s mouth is busted, but he hits another dive for good measure. The PCOsault is broken up so Maclin knocks him off the top and hits a dive of his own as we take a break.

Back with Maclin pulling PCO’s shoulder into the post a few times and grabbing a top rope superplex for two. PCO gets all fired up though and hammers away, including a DDT. The Cannonball sets up the Deanimator but another Cannonball hits steps. Maclin hits a running spear against the barricade and then crushes PCO’s arm in the step for a bonus. The shoulder is WAY messed up (looks dislocated) but PCO beats up the medical people. That lets Maclin hit a chair shot to the ribs, followed by a DDT onto the chair for the pin at 12:24.

Post match PCO sits up and goes after Maclin, who runs off scared.

Flashback Moment Of The Week: Samoa Joe retains the World Title in King of the Mountain at Slammiversary 2008.

Tasha Steelz, with Savannah Evans, yells at Deonna Purrazzo for not helping her last week. Purrazzo says she doesn’t need their help so the two of them storm off. Chelsea Green comes in to laugh.

Matt Morgan pops up as this week’s cameo and talks about what his time meant here. Vincent comes in to mock him before leaving.

Non-title and the rest of Violent By Design is here. Doering shoves him down to start but Alexander is back up with a headlock. A belly to back suplex doesn’t get Doering out of trouble but he kicks out of the ankle lock without much effort. Doering gets in a running shoulder to drop Alexander for two and then sneers a lot. We hit the neck crank for a bit but Alexander is right back up with a middle rope knee. Some rolling German suplexes have Doering in trouble so the Violent By Design flag is thrown in. That’s fine with Alexander, who hits Doering with the flag for the DQ at 6:30.

Post match Alexander cleans house and stares down Eric Young, who backs off.

Moose isn’t worried about Sami Callihan’s mind games, even as the lights flicker.

We look at Ace Austin joining the Bullet Club in Japan.

Austin and the Bullet Club were happy and then beat up an angry Alex Zayne.

Moose goes hunting for Sami Callihan….and actually finds him, setting up the brawl in the back. Callihan is busted open but Moose finds that he is locked in an area backstage. Callihan reveals that he has the key and beats Moose up before locking him in.

Matt Cardona insists that he is the REAL Digital Media Champion but since he is hurt, he hands it off to Brian Myers. That’s fine with Myers, who will defend against Rich Swann at Slammiversary.

Slammiversary rundown, with Alex Zayne being added to Ultimate X.

That would be Matt Taven/Mike Bennett/Eddie Edwards for Honor No More. Bennett and Edwards trade headlocks to start for an early standoff. Bennett gets sent into the corner for some alternating shots to the face, allowing Sabin to come in and kick him down. That’s broken up and it’s off to Taven, who takes over on Sabin without much trouble. Kazarian comes in as well with a neckbreaker for Taven before cranking on Edwards’ arm. Everything breaks down and the good guys take over, including the springboard spinning legdrop to Bennett as we take a break.

Back with Shelley Stunning Edwards over the top rope but Bennett pulls the leg to cut him off. Everything breaks down again and Sabin gets launched into a powerbomb to take him down too. Bennett hits Edwards by mistake but Sabin and Kazarian are pulled to the floor to break up a hot tag attempt. Some shots to Shelley’s head seem to wake him up so Edwards kicks him in the head.

Edwards kicks Bennett by mistake though and now the hot tag can bring in Kazarian to clean house. Kazarian flips out of a double belly to back suplex and hands it back to Shelley to pick up the pace even more. Everything breaks down (again) and Sabin hits a cutter on Taven. The parade of dives is on until Sabin gets triple teamed inside.

Kazarian is back in to take Edwards down for two and Sabin hits a middle rope tornado DDT for two on Taven. A slingshot cutter hits Taven but Bennett cuts Sabin off. The Clothesline From Hell, Michigan hits Bennett but a low blow lets Edwards grab the Die Hard Driver for the pin on Sabin at 20:27.

Post match Heath runs in with a chair for some revenge but Kenny King and Vincent come in to build up the numbers again. Heath’s ankle is Pillmanized over and over to end the show.

Results
Rosemary b. Tenille Dashwood – Rollup
Steve Maclin b. PCO – DDT onto a chair
Joe Doering b. Josh Alexander via DQ when Alexander hit him with a flag pole
Honor No More b. Kazarian/Motor City Machine Guns – Die Hard Driver to Sabin 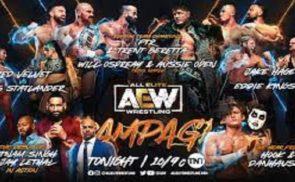