Update your calendars. While television has become even more important in recent years, pay per view is still where almost everything reaches its climax. WWE runs about a pay per view every month but most promotions are more quarterly or even less frequently. That includes AEW, which only runs four pay per views a year. Now one of those is going to be moved.

We are coming up on AEW’s first pay per view of the year with Revolution. The show debuted back in 2020 and seems to have become the official first quarter pay per view. So far the show already includes one match, as Sting will come out of retirement to team with Darby Allin against Brian Cage and Ricky Starks. However, we might be waiting a bit longer than expected.

According to the Wrestling Observer Newsletter, AEW will be moving Revolution from Saturday February 27 to either March 6 or 7. March 6 is a Saturday, making it the more likely date. The show is being moved to avoid possible competition from a Jake Paul pay per view boxing event. AEW has already announced the show but has made no mention of the date change.

Opinion: This is something that is going to happen every now and then and thankfully they are making the change a long time in advance. At the end of the day, AEW is not going to want to compete with a more mainstream sport as boxing has a pretty good track record when it comes to pay per view business. This won’t make a big deal, but another week of build could help a bit. 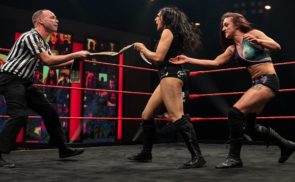 WWE Has Some TV Issues After WrestleMania 37