We less than a month away from the next Takeover and that means it is time to start setting the stage. However, that does not exactly seem to be the case here, as the focus is going to be on both of the Dusty Rhodes Tag Team Classics. Yes both of them, because we are going to have a women’s edition this year as well. Let’s get to it.

We open with a look at last week’s first round Dusty Classic matches, plus at what is coming tonight. In addition to the tournaments, we also have the return of the Fight Pit between Tommaso Ciampa and Timothy Thatcher.

Beth Phoenix is back in person and we even have some streamers.

That would be Johnny Gargano/Austin Theory. Theory powers out of Ruff’s headlock but gets staggered by a dropkick. Ruff’s crucifix bomb is broken up but Theory misses his dropkick. Kushida comes in to work on the arm, including tying it around his legs and snapping it back. It’s off to Gargano to change things up though, including taking Kushida down for some knees to the back.

Theory’s rolling dropkick puts Kushida down again and a double back elbow drops him again. Kushida slips out of a suplex though and the hot tag brings in Ruff to clean house. Theory isn’t having that and snaps off a torture rack powerbomb for two as we take a break. Back with Ruff fighting out of a chinlock but getting taken right back down with a neckbreaker. Kushida gets knocked off the apron though and it’s a backbreaker into a neckbreaker for two on Ruff.

Theory sends Ruff into the corner but Ruff comes out with a spinning middle rope cutter. That’s enough for the hot tag off to Kushida so house can really be cleaned, including a tornado DDT on Gargano on the floor. Back in and Gargano hits his rolling kick to the head but Kushida is right back with the cross armbreaker. Theory makes the save and a leg trap brainbuster onto the knee gives him two on Kushida. Another tag brings in Ruff, who dives onto Theory at ringside. Gargano kicks Kushida in the head but gets hiptossed into a basement dropkick. An arm trap northern lights suplexes finishes Gargano at 14:47.

Pete Dunne talks about how Finn Balor is NXT Champion but Dunne built an entire brand on his back. He is the real threat to Balor’s title and the one who can take away his legacy.

The Doomsday Saito into a pair of running forearms to the back of the head finish Adonis at 1:18.

Result: Karrion Kross b. Ashante Adonis – Running forearm to the back of the head (1:18)

Post match the medics and Adonis’ partner Desmond Troy come out to help, with Kross choking Troy out.

Video on MSK, with the two of them talking about how hard they have worked to get here.

Barthel takes Dorado down to start and grabs a butterfly suplex. The hammerlock goes on and Dorado is sent throat first into the middle rope. Dorado gets over for Metalik, who comes in with a splash off of Dorado’s shoulders for two. Aichner comes in to take Metalik down with a backbreaker for the save as the power takes over. The reverse Sling Blade gets Metalik out of trouble though and Dorado comes back in, only to have Aichner cut off the suicide dive. Dorado gets slammed on the floor and Metalik gets caught in the Tree of Woe.

That means the double dropkick and we take a break. Back with Dorado fighting out of a cravate and grabbing the Golden Rewind. Barthel puts on his own chinlock before putting Dorado on the top. You don’t do that to Dorado, who takes Barthel down and gets over for the next hot tag to Metalik. A rope walk hurricanrana into a springboard moonsault press gets two on Aichner for a near fall.

Barthel catches Metalik’s dive so Dorado runs in with a dropkick for the save. Metalik slips out of the suplex though and a missile dropkick/sunset bomb combination gets two more on Aichner. It’s back to Dorado, who gets crushed by Aichner. A facebuster drops Aichner and a hurricanrana sends Barthel into him for a big crash. With Aichner out on the floor, Metalik hits a huge top rope moonsault to take him down again. Back in and Dorado’s shooting star finishes Barthel at 14:40.

Post match Alexander Wolfe pops up to stare Imperium down.

We see the official weigh-in for the Fight Pit, with Tommaso Ciampa at 201 and Timothy Thatcher at 225. They nearly got in a fight here but are quickly separated.

Here’s Beth Phoenix to talk about various women who played a part in the Women’s Revolution. Women’s wrestling has grown a lot because the fans wanted it to become bigger, and tonight it’s time to make history again. Therefore, it’s time for the first women’s Dusty Rhodes Tag Team Classic.

Carter and Storm start things off with Carter working on a wristlock. Storm reverses into one of her own so Carter switches over into a headlock. A shoulder puts Carter down and there’s a dropkick for two. Martinez comes in for a side slam and it’s off to Catanzaro, who is taken down in a hurry. The chinlock goes on with a knee in Catanzaro’s back before Martinez blocks a tornado DDT attempt with straight power. A powerslam gets two on Kacy and we take a break.

Back with Martinez sending Kacy flying with a choke suplex and taking her up top. The superplex is countered into a super hurricanrana to drop Martinez but Storm comes back in to cut off the tag. That lasts for all of three seconds as Carter gets the tag to start cleaning house. A running dropkick in the corner hits Martinez and a low superkick drops Storm.

Another kick to the face sets up a basement dropkick for two on Storm as everyone is back in. Cue Io Shirai to pull Martinez to the floor and throw her over the announcers’ table though, leaving Carter to trip Storm down. That lets Catanzaro go up for a REVERSE BLACK ARROW and the upset pin at 12:51.

Finn Balor comes in to William Regal’s office to demand Pete Dunne. Balor wants to deal with Oney Lorcan and Danny Burch too though, so Regal says find a partner. Regal seems to have an idea.

Isaiah Scott stops Bronson Reed on his way to the ring for some advice we can’t hear.

Ashante Adonis is hurt but a very excited Carter and Catanzaro come in to celebrate.

Rust has Malcolm Bivens with him. During the entrances, we hear what Scott said: don’t ever be in his business again. Rust grabs the wrist so Bronson cranks on the hand to counter with ease. A rather large headlock has Rust in trouble and a big shoulder puts him on the floor. Rust slides back in and is quickly caught in a gorilla press gutbuster. That’s enough to send Rust outside for some advice from Bivens, followed by Rust snapping Reed’s arm across the top.

Rust cranks on the arm as we cut to a split screen with Io Shirai and Toni Storm being help apart in the back. Reed shrugs it off and hits a running splash in the corner, setting up the chokeslam for another near fall. Rust manages a Samoan drop out of the corner for his own two but Reed shoves him off. The backsplash crushes Rust and the Tsunami REALLY crushes Rust for the pin at 4:49.

Finn Balor needs a partner and seems to have an idea because someone owes him a favor.

Post break, Balor goes in to see the Undisputed Era and looks all of them over. Balor says they’re all grown men and looks at O’Reilly, saying he knows why he’s here. Balor asks if O’Reilly is in and, after a long stare, O’Reilly says he is. They’ll see each other next week, with O’Reilly calling Balor champ as the tension is rather high.

Here is Legado del Fantasma for a chat. Santos Escobar says he is the champion of champions because he doesn’t have to conquer a curse and doesn’t have a glass jaw. Some people try to act like a champion like Karrion Kross but he couldn’t even make it through his first title defense. Escobar has beaten everyone to come after him, including the Lucha House Party.

The rest of the team has won their first round Dusty Classic match, putting them one step closer to the Tag Team Titles. Cue the Lucha House Party, who will face Legado in the second round, for the brawl. Escobar bails but Curt Stallion comes in to take him out. The good guys clear the ring with Stallion knocking Escobar off the apron. Commentary is confused by why Stallion is here.

Drake Maverick gives a fired up promo about how he and Killian Dain are going to win the Dusty Classic. Dain: “That was pretty good!” A slap on the back has Maverick in pain and he still doesn’t even have Dain’s number.

This is inside the Fight Pit, which is a special cage around the ring with a platform around the top of the cage where the wrestlers can walk. There are no ropes in the ring and you win by submission or knockout only, though the fall must take place on the mat rather than on the platform. They start on the platform for some stalking but then start slugging it out.

Back from a break with the two of them on the mat with Thatcher being sent into the walls. That’s only good for a five and the Fairy Tale Ending is countered with a ram into the steel. Thatcher tries to wedge Ciampa’s hand into the gap between the walls but settles for a suplex into a keylock instead. Now it’s bending the fingers back and slamming them off the mat for some rather evil pain. Ciampa is right back with a shot to the leg and the half crab goes on.

That’s broken up as well and Thatcher kicks him into the wall again. The sleeper goes on so Ciampa kicks him low for the break, setting up Willow’s Bell, using the referee as a rope for a funny/smart moment. They slug it out again with Thatcher going into the steel, setting up the Fairy Tale Ending. The rear naked choke goes on but Thatcher picks him up for a ram into the steel. Thatcher grabs a sleeper but stops to put Ciampa’s leg through the corner gap. A stretch muffler finishes Ciampa at 14:03.

Post match Thatcher is VERY happy with the win but stops to stare at Ciampa in a show of respect to end the show. 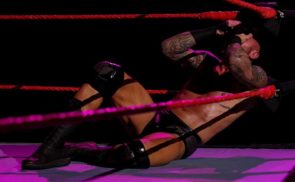 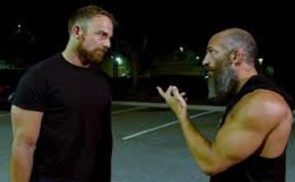