We’re done with Double Or Nothing and that means it’s time to start getting ready for the summer. I’m not sure what that is going to mean as AEW takes its time to get to their next pay per views. We do have Fyter Fest though, and that should give us a goal for the next few weeks. Let’s get to it.

We open with a recap of Double Or Nothing.

The Inner Circle is upset over their loss and have to get rid of this box of Stadium Stampede winner shirts. Hang on though as it’s a little more than that. Santana got a deal from his buddy Carlos and opens the back of a truck, showing crate after crate of shirts. Jericho is distraught.

Here’s a preview of what is going down tonight.

Matt Hardy and the Elite are ready for their match but Hangman Page wants to go get a drink. Kenny Omega joins him, so Matt is ready to team with the Bucks on his own. They wouldn’t mind an older version of him, so Matt turns into the Team Extreme version. Actually can he go a little older than that? Matt becomes….I guess late 90s version and asks if they’re ready to be spot monkeys.

The fight is on and JR takes a completely necessary shot at WWE for mentioning the Plexiglas in front of their wrestler fans. Back in and the hot tag brings in Hardy for the Side Effect on Kassidy. A double DDT plants Private Party and there’s another Side Effect to Janela. Everything breaks down and Private Party hits the big double flip dive. Quen comes up holding his knee but Kassidy slingshots in with a Downward Spiral (which didn’t land right and looked like Matt gave him a Side Effect) for two. The Bucks come back in and More Bang For Your Buck finishes Kassidy at 9:53.

Post match, Hardy helps the injured Quen to the back. Butcher and Blade run in to beat down the Young Bucks but FTR (the Revival) drive in with their truck for the save. A spike piledriver plants Blade and FTR shows respect to the Bucks.

Jon Moxley is on commentary and Taz is here with Cage. Splash in the corner, powerbomb, Drill Claw in 1:13.

Post match Taz promises that Cage is going to take Moxley’s heart at Fyter Fest. Moxley better bring his grit, because he’s only surviving if Cage lets him.

It’s time for Britt Baker’s Rules Of Being A Role Model, with Tony Schiavone having to operate the pointer. The third rule is all about Britt: Don’t Hurt The Role Model. She claims a conspiracy has led her to having a broken tibia, and we look at the various conspirators. They would be the wrestlers involved in the match last week (Britt: “Kris Stadtlander, you being an alien is a crock of s***!”), and now we need a chart. Everything leads back to Aubrey Edwards, who is here for every bad thing that happens to her. Baker: “When my nose was broken, Aubrey Edwards was somewhere!” Baker will be back at All Out.

The Inner Circle is ready for their pep rally tonight when Orange Cassidy walks in and out. Jericho: “Did he really just do that?”

Non-title. Shida takes Jaymes up against the ropes but Jaymes shoves her back a bit and dances. Shida is invited to dance as well but Jaymes kicks her leg out as a result. That’s too far for Shida, who grabs her by the hair, only to have Jaymes do the same. A backbreaker finally slows Jaymes down and we hit the one armed camel clutch. Jaymes gets out and hits Shida in the face for two, only to miss a Lionsault. The running knee to the face sets up a running knee to the back of the head to give Shida two. The Falcon Arrow finishes Jaymes at 5:20.

We look at Cody winning the first TNT Title. Cody talks about Tom Brady being his favorite quarterback and it’s not because he was from the northeast. Cody: “I don’t think I’ll ever be welcome back in Connecticut.” It’s because Brady wasn’t the first pick and neither was Cody. When Tony Khan wanted to start the best bell to bell company in the world and he was the fourth or fifth pick.

Cody talks about how Dustin got all the Dusty genes (we cut to Brandi and Dustin watching at ringside and Brandi having to get QT Marshall’s attention away from Allie) but he will outwork anyone. That’s why every week, it’s an open challenge for the title. Wrestling is without its greatest asset at the moment but the fans have never dropped them. So follow him.

The winners get a title shot next week, Penelope Ford is here with Sabian/Havoc, it’s Scorpio Sky/Kazarian for SCU and it’s a brawl before the bell. We settle down to Sky working over Havoc’s arm and Kazarian dropping a knee onto it for a bonus. Kazarian gets two off an O’Connor roll but Havoc kicks him into a boot from Sabian to take over. A catapult sends Kazarian into an eye poke as the villains take over. Havoc goes after the eyes as we take a break.

Back with Kazarian still in trouble until he can slingshot into a roll over to Sky. A rolling cutter sets up a dragon sleeper on Sabian with Havoc making a fast save. Sabian’s top rope double stomp gets two on Sky but Kazarian comes back in for an assisted swinging DDT for two of his own. Ford breaks up SCULater though and it’s the dropkick/Michinoku Driver combination to Sky for the pin at 12:02.

MJF is ready to win the battle royal because he’s awesome. Wardlow will be in there with him as his insurance policy. Wardlow: “But…”. MJF: “BUT NOTHING!!!!” Just ribbing of course.

The winner gets a shot at Cody next week. Cassidy isn’t in the ring when the bell rings so here are Santana and Ortiz to jump him from behind. It’s the usual brawl to start as MJF sits on the top to hide behind Wardlow. Luther throws Stunt to start and gets kicked in the face by Luchasaurus as a result.

Stunt tries to go after Luchasaurus as Kiss kicks MJF in the face. Wardlow dumps Kiss (who JR seemed to refer to as “she” twice) and MJF goes outside to beat Kiss up some more. Cabana hits the Flying Apple on Billy, who dumps Cabana out without much effort. That’s enough for Cabana to take a flier from the Dark Order at ringside as we take a break.

Back with Stunt hurricanranaing Daniels out and promptly being tossed out by Wardlow. We’re down to Wardlow, Luchasaurus, Gunn, Jungle Boy and MJF. The monsters slug it out but MJF goes after Luchasaurus’ leg. Gunn breaks that up and slugs it out with Luchasaurus, until MJF and Wardlow dump both of them.

Cassidy rolls in because he was never eliminated so MJF busts out the ring. It hits Wardlow by mistake and Jungle Boy eliminates MJF. Cassidy and Jungle Boy get rid of Wardlow and we’re down to two. Boy sends him over the top but Cassidy skins the cat and comes back in for some Superman punches. A rebound clothesline takes Cassidy down and a running hurricanrana gives Boy the win at 11:15.

It’s time for the pep rally, with cheerleaders and a drum band. Vickie Guerrero (“Get your earplugs ready”) comes out as an extra cheerleader to introduce the Inner Circle. Chris Jericho promises that the Inner Circle will rise like five sexy phoenixes. This is all for the fans so everyone gets a Stadium Stampede shirt! The fans start throwing the shirts back and Sammy, on a crutch, has to calm things down. They may not have won, but they participated, so everyone gets a trophy! Jericho: “Mine says king of dad jokes.” Sammy: “Well there’s a pandemic going on so it’s hard to find trophies.”

Santana has some chopped cheese for Ortiz, some Vick’s vapor rub for Sammy (Santana: “My abuela says that heals anything.” Jericho: “My abuela says that too.”), some discount boots for Jake Hager, and a picture of Mark Anthony for Jericho. That works for Chris, because that’s his hero. Sammy gets the Hit Me Up mobile scooter, and Ortiz gets some headphones to stop the ringing in his ears. Hager….has written a poem, about how great the Inner Circle is. He’ll choke anyone who doesn’t like them and he wants to run the Elite over with his Tesla.

This goes into a crazed rant about how he wants to murder the Elite, with Jericho having to cut him off. Hager: “The end.” Jericho: “….good stuff.” Sammy asks Jericho what he wants, which would be Mike Tyson’s head on a platter. Jericho remembers what Tyson did to him in January 2010 on a Monday night so it’s time for revenge. Sammy couldn’t get Tyson’s head on a platter, but he’s got a CHEESE PLATTER, plus a little bit of the bubbly. Actually the cheese has been eaten and the bubbly has been consumed.

Cue Tyson with his vast entourage (including some MMA fighters), carrying the bubbly bottles. Jericho yells at Tyson for turning on him but Tyson says he deserved it for being a sucker. An apology is demanded but Tyson takes off his shirt. There’s the shove and the pull apart brawl is on. The locker room comes in for the save and everyone has to pull them apart to end the show. 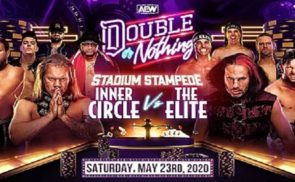