So long Bay-Bay Cole? There are a lot of talented wrestlers down in NXT and one of the biggest questions involves seeing the wrestlers move up to the main roster. That can be one of the most interesting times in all of WWE at the moment, but it doesn’t do a ton of good for NXT. What makes it even worse though is having a wrestler leave NXT without going to the main roster. That could be a possibility at the moment.

Over nearly the last three years, the Undisputed Era has been a force in NXT. The team has reached some incredible success, including a stretch where the group held all of the men’s titles in NXT, putting them in the same conversation as the Four Horsemen and Evolution. Adam Cole has always been the centerpiece of the team, but that might not be the case much longer.

According to Wrestlingnews.co, Adam Cole’s current WWE contract is up in August or September and he may be interested in going to AEW. Cole’s girlfriend Britt Baker works for AEW and there is a chance that he may go to AEW to be with her. Cole also attended AEW President Tony Khan’s Memorial Day party along with Baker. Cole is currently the reigning NXT Champion and will have held the title for a year straight as of next Monday.

He would fit in well over there. Check out Cole’s work in NXT:

Opinion: This is an interesting situation as while I can see AEW wanting to bring Cole into the fold, WWE is not going to give him up without a fight. After spending so much time and resources on him down in NXT, they pretty clearly have some kind of major plan for him. Cole is certainly a commodity, but he is the kind of commodity that WWE is going to fight hard to keep.

What do you think Cole will do? Do you want to see him in AEW? Let us know in the comments below. 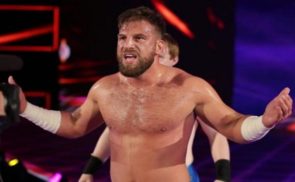