New WWE Stable Already Seems To Be Broken Up

News from where? WWE has a lot of wrestlers on its roster and it can be rather hard to come up with something for all of them to do. With so many people around, at some point you have to start putting them together, just for the sake of finding a place for them all. A stable can help with that, but a recently formed group might already have been split up without much notice.

Over the last few months, we have seen the rise of stables on Monday Night Raw. Both Zelina Vega and Seth Rollins have amassed a group of wrestlers each, with one name from Vega’s team even jumping over to Rollins’ side. That is the kind of thing that makes for some interesting moments, but they weren’t even the only two stables around. They are now though, as something seems to have changed.

Last week on WWE Main Event, Ricochet defeated Shane Thorne, who had Brendan Vink in his corner. MVP was on commentary for the show, as he has been for the last several weeks, and made no mention of being associated with Vink and Thorne. This comes after MVP has been seen with Bobby Lashley and made no reference to managing the team on last week’s Monday Night Raw.

The more things change. Check out MVP with all his past and former clients:

Opinion: This is something that makes sense as it’s not like Thorne and Vink had done much with MVP in the week or two that they had been together. MVP and Lashley are a better fit so there is hardly any major loss. It was a short form experiment so now we can move on to something else, which seems to be an upgrade. It’s nice to see WWE catching on like this as that’s not something they often do.

Do you like the move? How far can MVP take Lashley? Let us know in the comments below. 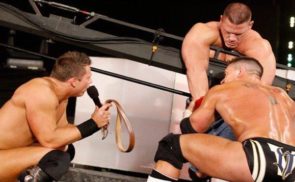