It’s the second night of Fyter Fest and that means we could be in for a big show. The card is certainly stacked but I’m curious to see how they handle the lack of the World Title match in the main event. Instead of Jon Moxley defending the title against Brian Cage, we will be seeing Chris Jericho vs. Orange Cassidy in a grudge match. Let’s get to it.

Private Party, with Matt Hardy, is challenging but first we need a note from Britt Baker, saying that Page’s pyro gave her third degree burns in another conspiracy to keep her out of the Women’s Title picture. Quen shoulders Omega down to start but a standing moonsault only hits knees. The champs start chopping away at Quen before it’s Page coming in for two off a tabletop suplex.

Quen blocks the Kitaro Crusher with a handstand though and it’s a dropkick to stagger Omega. The Silly String hits Omega so Page powerbombs Quen into the fans. A dropkick to the back sends Page after him though, leaving Omega to take an enziguri to the back of the head. Page comes back in to kick Quen in the face and Omega tosses Quen into a German suplex from Page. Quen is right back up for half of a double Spanish Fly for two on Omega as things settle back down a bit.

It’s Omega and Kassidy slugging it out until something like an Orton backbreaker gives Kassidy two. Page comes back in to powerbomb Kassidy onto Quen for two but a powerslam is broken up. Some quick strikes to the head put Page down and Kassidy dives down onto Omega. Quen has to bail out of the 450 to Page so Kassidy hits a rolling DDT to put Page onto the ramp. Back in and the shooting star gets two on Page with Omega making the save. Omega’s V Trigger breaks up Gin N Juice though and it’s a superbomb to drop Quen. The Last Call retains the titles at 10:34.

Here’s what else is coming on the show.

Jake Roberts, with the big bag, is here with Archer as usual and Lance carries the unconscious Sonny Kiss to the ring. They go straight to the floor to start with Archer sending him into various hard objects. Janela gets inside and manages a dropkick through the ropes to stagger Archer, setting up the big dive off the top. Janela tries to go up top with a chair but the referee takes it away, allowing Archer to shove him off the top.

A hard whip into the corner has Jake rather pleased and it’s a big forearm to the chest to put Janela down again. Back from a break with Archer shrugging off Janela’s comeback bid but getting distracted by Kiss. A discus forearm rocks Archer so Janela kicks at the leg for little avail. The Black Out is countered with a clothesline for two so Jake gets on the apron. The distraction lets Kiss hit a 450 but Archer is right back with a Black Out off the middle rope through a table at ringside for the easy pin at 11:11.

Darby Allin does a Coffin Drop from a really high (as in multiple stories) platform.

Here are Taz and Brian Cage for a chat. Taz is glad Tony Schiavone is here because he has been a part of so many iconic moments. That is the case again tonight as Taz has a bag. In the back is the FTW World Title (Taz’s custom title from ECW) because Cage needs a title on his way into Fight For The Fallen. Next week, Cage is taking the World Title.

The villains come in with FTR’s stolen truck. Nick and Pentagon start things off with the latter throwing his glove at FTR. There’s no contact so it’s off to Harwood instead, with a quickly broken hammerlock on Pentagon. A shoulder works a bit better and Harwood drops a leg before handing it off to Wheeler. Fenix comes in for some rapid fire top rope kicks to Harwood’s ribs but Wheeler makes the save.

Harwood runs Fenix over without much effort though and it’s Matt coming in for a clothesline. Fenix rolls away though and makes the tag to Butcher. A double dropkick takes Butcher down so Blade comes in to kick Nick in the face. The gutbuster into a gutwrench sitout powerbomb gives Butcher two and it’s back to Pentagon. A reverse powerbomb into a Rock Bottom from Butcher gets two more as Nick is in even more trouble. Fenix and Nick go to the middle rope with Nick jumping to the top for the super hurricanrana.

Wheeler tags himself in and Nick superkicks Fenix into a dragon suplex for two. Everything breaks down and we take a break. Back with Harwood fighting out of a chinlock and making the hot tag to Matt. House is cleaned in a hurry, including a double dropkick through the ropes. The top rope elbow gets two on Fenix and Hardoow hits the DDT on Blade. Butcher comes back in to clean house but Wheeler and Nick combine to hit the Goodnight Express on Fenix.

Butcher is sent over the barriacde and the good guys make a bunch of tags to set up a double superplex into a frog splash into a Swanton to crush Blade but Fenix dives in for a rather late save. We settle down to Pentagon kicking at Matt but Nick is back in with a forearm to Pentagon’s head. Nick gets caught on the ropes and Fenix hits a running Canadian Destroyer onto the big pile at ringside for your insane safe spot of the match. Nick superkicks Harwood by mistake and it’s a spike Pentagon Driver to finish Nick at 16:43.

Big Swole is just arriving but isn’t allowed in due to being suspended, thanks to some requests from Britt Baker. Swole: “YOU EVER HEARD OF A FAX MACHINE???”

King is willing to let Paige start and it’s a running clothesline to put Paige down to start. The big legdrop hits Paige and some shoulders in the ribs make it worse. Paige is sent into the corner and it’s King coming in to pound away on the back. King’s choke doesn’t do any good and it’s a spear to take Paige down again. Rose throws Paige at King and powerbombs Paige onto her for the double pin at 2:24.

Post match Rose says actions speak louder than words and now she has a manager. She won’t be telling us who it is right now but whoever it is will make her champion.

Colt Cabana has a huge bruise on his ribs but he can wrestle tonight. Brody Lee comes in to say the Dark Order won’t let it happen again. Lee helps the very ginger Cabana up.

It’s Brody Lee and Stu Grayson for the Dark Order with the rest of the team watching from the stage. Daniels works on Grayson’s arm to start but gets taken down with some power. That’s fine with Kazarian and Sky, who come in for a double shoulder to Grayson. A Pele takes Sky down though and it’s Cabana coming in while still favoring his side. Cabana crawls through Sky’s legs but gets kneed in the face to send him into the corner.

A Dark Order distraction cuts the rest of SCU off though and Lee comes in to snap off a suplex to drop Sky. We take a break and come back with Sky hitting a neckbreaker on Cabana, allowing the double tag to bring in Kazarian and Lee. Everything breaks down and Lee is finally knocked outside, only to have Graayson hit a fireman’s carry faceplant on Sky.

Lee comes back in for the spinning Boss Man Slam on Kazarian but Daniels knocks Lee outside for the suicide dive. A release Rock Bottom drops Grayson and the Best Moonsault Ever gets two with Cabana making the save. Back in and Lee clotheslines Daniels’ head off but lets Cabana get the pin at 12:10.

Post match Cabana wants to celebrate but Lee glares at him.

Here’s what’s coming next week, including FTR vs. Lucha Bros and the Elite vs. Jurassic Express, plus the TNT Title open challenge and the World Title match.

Big Swole tries to get to Britt Baker and throws some trash at Rebel, who accidentally brushes Baker in the face. Baker freaks out and claims a broken nose. Tony: “She needs a doctor!” JR: “SHE IS A DOCTOR!”

No Best Friends here but Santana and Ortiz, with orange juice, are at ringside. Cassidy puts the hands in his pockets to start and ducks a clothesline, setting up a dropkick to the floor. The suicide dive connects but Jericho takes it back inside and grabs the Walls of Jericho in a hurry. The rope is grabbed so Jericho knocks him down again without much effort. There’s a backbreaker but Cassidy grabs three straight rollups for three straight near falls. Jericho sends him hard to the floor again though and we take a break.

Back with Jericho grabbing an abdominal stretch, plus the rope for a bonus. Cassidy fights out and they trade shots to the face, only to have Cassidy sent outside again. Back in and Casidy fights up, puts his hands in his pockets for the slow motion kicks, and then hits a full speed superkick for two. Jericho is back up and tries a superplex but Cassidy shoves him off and hits a top rope splash for two. It’s Jericho heading outside again and Cassidy hits a big dive to the floor onto all of the Inner Circle.

Back in and a top rope DDT gets two but Cassidy takes a long time to set up the Superman Punch. Jericho counters into the Walls but Cassidy reverses into a small package for two. Santana and Ortiz get involved with the orange juice so here are the Best Friends to cut him off. A bat shot to the face sets up the Codebreaker for….two.

Jericho elbows him down but misses the Lionsault, allowing Cassidy to hit a Michinoku Driver for his own two. They slug it out from their knees and Cassidy reverses a suplex into the Stundog Millionaire. The tornado DDT plants Jericho for two, with Aubrey in the orange juice on the two count. The Superman Punch is loaded up but it’s the Judas Effect to give Jericho the pin at 18:31. 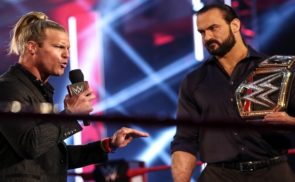