It’s time for another big show with Fight For The Fallen, which will feature a major main event as AEW World Champion Jon Moxley defends the title against Brian Cage. That’s quite the big way to go and it should be interesting to see if it’s enough to cut off NXT’s streak of viewership wins over AEW. Let’s get to it.

The opening video mainly looks at Cody vs. Sonny Kiss for the TNT Title.

Cody is defending and has Arn Anderson with him. Kiss on the other hand has some of the Jacksonville Jaguars cheerleaders. Cody charges at him with a kick to the face but stops to do some pushups, much to Arn’s annoyance. The Disaster Kick gets two and Kiss bails outside. Arn yells at Cody for not being serious enough and Kiss gets in a few shots to the back.

They head back inside with Cody grabbing a full nelson as we see Tully Blanchard watching for the second time. Kiss slips out and hits a t-bone suplex. The middle rope hurricanrana takes Cody down and a headscissors sends him into the corner. A 450 gives Kiss two but another headscissors is countered with a shove over the top and onto the ramp. The Alabama Slam on the ramp gets two, with Cody trying the cover too close to the rope.

A terrifying looking Vertebreaker gets two more and Cody hits a top rope superplex for the same. Cody yells at the referee and gets rolled up, only to switch into a Crossface. Kiss makes the rope again and frustration sets in, so Cody unhooks a buckle pad. The distraction lets Kiss send him face first into the exposed buckle for a close two but Cody comes back with Cross Rhodes to retain at 10:44.

Post match they hug and Arn seems to calm down a lot.

How to donate to various charities, which are the point of tonight’s show. Nothing wrong with that.

Here’s what’s coming on the show.

The Bros are driven to the ring by Butcher and Blade in FTR’s truck. Pentagon stomps Harwood down but Harwood is ready for the chop and stomps on Pentagon’s hand. It’s off to Fenix who takes Harwood down for a not so great version of the wheelbarrow splash. Wheeler comes in for a slingshot elbow into a backbreaker from Harwood to take over. A quick legdrop from Harwood sets up some clubberin to keep Fenix in trouble.

Fenix slips out of a suplex though and it’s back to Pentagon for the rapid fire kicks. An apron dropkick hits Harwood on the floor and the Bros get to pose. Back with Harwood getting the hot tag to throw some suplexes and hit a sliding uppercut for two on Fenix. Wheeler comes back in but gets kicked down, setting up a springboard legdrop for two. Harwood is back in for a top rope bulldog/reverse powerbomb combination for another near fall, with Pentagon having to make a save.

The top rope superplex connects on Pentagon but he gets his knees up to block Wheeler’s top rope splash. Harwood blocks Fenix’s springboard splash with his own raised knees and everyone is down. They pull themselves up and the slugout is on with Pentagon hitting a Sling Blade on Wheeler. The Pentagon Driver on the apron is broken up and they chop it out until Pentagon hits a kick to the face. Wheeler gets back inside and sends Pentagon outside for a suicide DDT, only to get taken down by Fenix’s dive. Back in and Fenix kicks Harwood in the head so Harwood pulls off the mask, setting up a small package for the pin at 9:30.

Post match Butcher and Blade taunt FTR over the stolen keys to the truck but here are the Young Bucks to superkick them down. They get the keys back and come to the ring but here’s Kenny Omega with a cooler. The beer is pulled out but FTR pours it on Omega’s head. The Bucks have to hold him back as Harwood pours the ice on himself to cool down. FTR gets in the truck but it doesn’t seem to start.

Here’s the Inner Circle, with orange juice, for a chat. Chris Jericho talks about having a great match last week….and brags about being the king of the ratings and how important that the demographic is compared to overall viewers. He has never lost in the demo and dubs himself King of the Demo. Everyone has been begging for a rematch with Orange Cassidy and that means it’s not going to happen. The fans chant that Jericho is scared but the Demo God is never scared.

Instead, Jericho drinks a toast to Cassidy and pours one out for his career, but here’s Cassidy to interrupt. Jericho insults Cassidy for being an entitled sloth so there is no rematch. He demands that Cassidy get out of the arena so Cassidy gives him a thumbs down….and orange juice rains down from the ceiling onto the Inner Circle. Jericho freaks out over the $7,000 jacket and demands a towel. He does get one, which has Cassidy’s face on it.

Jurassic Express thinks that was hilarious. Luchasaurus thinks there is nothing funny about facing the Elite. Stunt doesn’t have his kickpads but it doesn’t matter.

Jericho, now covered in juice, is on commentary in Taz’s place and doesn’t like the above the ring shot of the juice falling.

Omega is still soaked in beer but they did at least replace the mat. Boy works on Nick’s wrist to start and there’s the rope walk armdrag to send Boy down. The slingshot X Factor is countered with a handstand as we see Hangman Page drinking in the back. Omega and Stunt come in with Omega shoving him down without much effort. Omega won’t shake hands so Stunt slugs away and armdrags him down for two. A springboard headscissors puts Omega down and he isn’t sure what to think.

Jericho thinks it’s because Omega is underestimating Stunt, with the proof of Omega keeping his shirt on. Luchasaurus comes in to drop Matt onto his face. The kick to the head gets two as Jericho is suspicious about Luchasaurus being 65 million years old. Jericho: “I WANT TO SEE HIS BIRTH CERTIFICATE!” Everything breaks down and Stunt hits a dive, setting up the floss dance, because that stupid thing can’t just go away. Nick kicks him in the head, causing Jericho to deem him his new favorite wrestler.

Everyone at ringside stand together and look at Omega as he does the Terminator pose, then runs the rope and hits the big dive. We take a break and come back with Boy blasting Omega with a clothesline and hitting a springboard tornado DDT on Matt. Luchasaurus gets to clean house as FTR join Page at the bar (Jericho: “NO ORANGE JUICE AVAILABLE BOYS!”).

Omega comes back in to get headbutted by Luchasaurus. The V Trigger staggers Luchasaurus and there’s the snapdragon to all three of the Express (Jericho: “KENNY OMEGA IS MY NEW FAVORITE WRESTLER!”). The Extinction Level Event gets two on Omega with the Bucks making the save. The Tail Whip misses Omega and it’s time for the superkicks.

A triple tiger driver 98 gets two on Luchasaurus, with Jericho asking Excalibur why he knows that name. Stunt hits a 450 for two on Matt and everyone goes to the ramp for a springboard top rope Canadian Destroyer. That’s good for two so Omega V Triggers Luchasaurus and gets rolled up by Stunt for two. The One Winged Angel finishes Stunt at 15:30.

Post match Omega keeps hammering on Stunt until the Bucks pull him off. Omega tries to say that it’s not a big deal.

Hikaru Shida says she’s ready for Nyla Rose or anyone else.

Jon Moxley is ready to fight Brian Cage after all those weeks off.

Brandi kicks Paige in the face to start and Allie adds a superkick. It’s already back to Brandi for a Sling Blade but Paige gets over for the tag to Jenkins. That’s fine with Allie, who hits a reverse DDT for the pin at 1:58.

Here’s Nyla Rose for a chat. She has a manager but isn’t ready to tell us who it is. Instead, she’s going to let the manager tell us herself. Cue Vickie Guerrero to say she is going to guide Rose back to the Women’s Title. Rose is going to steal the dreams of everyone in the women’s division. There are some far worse choices than Guerrero for this spot.

Cage, with Taz, is challenging. Moxley goes right at him to start and gets knocked down without much effort. The confidence is high to start but Cage has to fight away from a Fujiwara armbar attempt. Cage does curls with Moxley and sends him flying but Moxley knocks him out of the corner. A middle rope dropkick puts Cage down and Jericho is rather pleased with Moxley getting to take his shirt off.

Moxley stays on the arm and gets two off a kick to the chest. The cross armbreaker is broken up with some forearms to the face but Moxley drops him ribs first across the top rope. That’s enough to put Cage on the floor and Moxley hits a suicide dive. Cage sends him into the barricade though and they fight near the stands. Moxley bends the arm around the barricade and gets in a kick to the steel and the barricade is set up against the apron. A belly to back suplex drops Moxley onto said barricade and we take a break.

Back with Cage grabbing a camel clutch before letting it go to take things outside. A suplex onto an open chair destroys Moxley again, but he’s fine enough to grab two near falls back inside. Moxley dropkicks him into the ropes and they trade clotheslines. The Paradigm Shift is countered but the second attempt connects for two. Moxley takes him up for a superplex and a slightly delayed near fall.

Moxley switches straight over to a Kimura but Cage powers out again. The apron superplex puts Moxley down but the Drill Claw is reversed into a cross armbreaker. Cage locks his hands so Moxley kicks him in the face over and over. Moxley bends the fingers back and gets the hold on in full. That’s switched over as Cage gets onto his face but Moxley switches it over again. Taz freaks out as Cage won’t tap and throws in the towel to retain Moxley’s title at 15:44.

Post match Cage hits Moxley with the FTW Title and unloads with right hands….and there go the lights. They come back up and it’s Darby Allin returning with a top rope skateboard shot to Cage. Moxley and Allin clear the ring as Taz and referees have to hold Cage back to end the show. 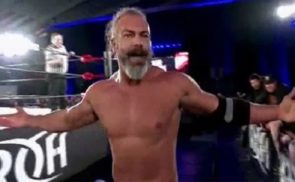 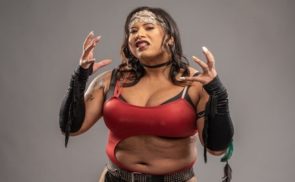