Kevin Owens Tried To Go Back To NXT

Would that count as a vacation? With so many wrestlers under the WWE banner, there are only so many main roster spots to go around. The company’s talent are often fighting over those spots and it isn’t the easiest thing in the world to get one. That can make for some big moments when someone is promoted to the main roster from NXT, but what about someone wanting to move back down to the other show?

There are certain people who have come up from NXT after being nothing short of legends down there. For many years, it was a one way ladder up to the main roster with wrestlers moving up and never looking back. In the last year though, some stars have gone back to NXT, with Finn Balor being at the top of the list. Some others want to head back down though, and one prominent name recently asked about doing so.

In a new interview with CBS Sports, former NXT Champion Kevin Owens revealed that he recently spoke to Vince McMahon about possibly heading back to NXT. It is not clear if this would have been a short term or long term move. Owens did make a one night return to NXT at Takeover: WarGames in November 2019, but has not appeared in NXT since. There is no word on if Owens will be heading back to NXT in the future.

Owens was a star in NXT. Check out some of his time down there:

Opinion: There’s something amazing about the fact that so many wrestlers seem interested in heading back to NXT. The line that you will hear is it is the college experience in wrestling before you move on to the real world on the main roster, so it isn’t exactly surprising that former stars want to see what else they can do down there, even if it is just for a quick visit. It makes NXT look like a third brand, which is almost hard to fathom given where the other two shows are. That’s quite the accomplishment.

Would you want to see Owens back in NXT? Who else should head down there? Let us know in the comments below. 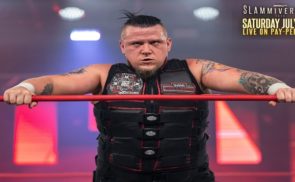