It’s tag team night as we have a triple threat tag match to determine the official tag team of the Inner Circle. That’s certainly one way to go, though it isn’t likely to help the issues that they are already having. Odds are the match will be entertaining though, as most of their matches are. Let’s get to it.

Here’s the Dark Order, complete with a cake because it is Negative One’s birthday. The cake is making John Silvery hungy so the fans sing Happy Birthday in a nice moment. Cue the Chaos Project, who does not like Negative One or any children at all. The brawl is on so here is the Hybrid 2 to jump the Dark Order as well. Hangman Page is here too and it’s time for an eight man tag.

Silver gets taken down to start and it’s a butterfly suplex to keep him in trouble. Serpentico comes in but gets taken down out of the corner, allowing the hot tag to Page. House is cleaned in a hurry as everything breaks down. Cabana hits a top rope flying apple to Serpentico and Page moonsault down onto everyone at ringside. Back in and Page picks up Silver and Reynolds at once to drop them back onto Serpentico for two.

Luther breaks up something off the top though, allowing Serpentico to DDT Reynolds for two. Page powerbombs Evans over the barricade as Luther loads up a powerbomb onto the cake. Negative One breaks that up with a kendo stick and Silver sends Luther face first into the cage. Back in the ring and a Stunner sets up a Buckshot Lariat to send Serpentico into a German suplex to give Reynolds the pin at 6:15.

Post break the Order holds Serpentico for a kendo stick shot from Negative One, who informs the Dark Order that his birthday was three days ago “you idiots”. And he throws the papers at Serpentico.

Back in the ring, John Silver asks Hangman Page if he is joining the Dark Order or not. Page says he can’t….but the HE SAID YES banners fall, and the parade starts on the stage anyway. Page says he can’t do it because he did the team thing before and it didn’t work. He had a lot of fun with them but he just can’t do this. More apologizing ensues and Page leaves, though he does take a bottle of booze from Stu Grayson on the way out.

Tony Schiavone introduces Sting, who is here to praise Darby Allin, who joins him in the ring. Before Sting can get very far, here’s Team Taz to rant against Sting for costing Cage the TNT Title last week. The challenge is issued for a street fight and Allin says be careful what you wish for.

The Young Bucks go to Kenny Omega’s house, where they find a portrait of Omega and Don Callis with their shirts off and their jeans riding rather low. Callis pops up and says that it was a birthday gift for Omega. Nick: “It was in October.” Callis: “It’s never too late to get started!” Anyway, Omega isn’t here because he’s been a bit busy. He’s also changed his number because people have been trying to call him up, including a bunch of old friends.

Callis sends Alex Marvez to the Dungeon (Marvez: “DUNGEON???”) but the camera has to stay here. With everyone else gone, Callis talks about how the Bucks have been friends with Omega for twelve years….and pays them for their twelve year investments with Omega. Matt: “We made this much last week.” Callis throws in another check for the merchandise, sending Matt over the edge with a rant about how the Bucks were there with Omega for years in Tokyo. Matt knows those checks aren’t any good either because they used to work for Callis’ company (Impact). The Bucks go after him and violence seems to ensue after the camera is covered.

Cody starts fast with the Cross Rhodes attempt but Avalon slips away. Cue Jade Cargill for a distraction though and Avalon gets in a low blow for two. Cody manages the Dustin Rhodes drop down uppercut but gets caught on top. Avalon pulls him down with a superplex and grabs a regular suplex for two.

We take a break and come back with Avalon missing something off the top. Cody seems to have hurt his knee so Avalon sends him outside. That doesn’t last long so they head back inside with Cody nailing a quick cutter. The powerslam sets up the Figure Four and Cody teases slapping him in the face, the threat of which is enough to make Avalon tap at 9:36.

Arn Anderson isn’t happy with Cody after the loss.

Tully Blanchard and FTR are happy with being #1 in the new rankings but here is Jurassic Express to interrupt. Jungle Boy says last week’s match taught him that he could hang with either of them, which Dax Harwood sees as a challenge. They’re fight next week, with Luchasaurus saying he’ll guarantee no one gets involved.

Comoroto is a rather big (muscular) guy with a lot of hair.  Moxley stomps him into the corner but Comoroto sends him into the corner instead. A running elbow to the face sets up a backbreaker but Comotoro misses a charge into the buckle. Moxley kicks him in the chest and snaps off a German suplex. The big clothesline doesn’t do much to Comoroto so Moxley chokes him out for the win at 3:55.

Post match Moxley says things are crazy around here and he can’t keep track of where everyone is. Kenny Omega thought he could bring his frat brothers from Nashville to watch his back but all that did was make it more interesting for Moxley. It’s just going to mean bigger brawls and more blood with more limbs to break. Omega can bring in whoever he wants because all roads lead through him. Moxley even throws in some pushups.

Eddie Kingston is ready to face Lance Archer next week so here’s Archer who is ready to fight now. Jake Roberts breaks it up and says we’ll do this next week without Butcher and Blade.

Kenny Omega isn’t interested in hearing some questions about being at the beach and is even less happy about AEW being at his house earlier. He finds Callis, who has a black eye. Omega wants to now who did this and Callis slips up by saying it was Nick and Matt. Omega isn’t thrilled and Callis throws Marvez out.

Dante Martin and Marq Quen start things off with Dante snapping off the hiptosses. Darius comes in as well for some dropkicks and Sydal joins them for a triple leapfrog into a spinwheel kick to Quen. We settle down with Private Party beating up Sydal until Top Flight comes in for a double half crab (as in three people pulling on a leg each legs). Sydal gets taken into the corner and we take a break.

Back with Kassidy holding Sydal in a chinlock but Sydal escapes and brings in Darius to clean house. The Spanish Fly drops Kassidy so Hardy comes in and is awkwardly sent outside. Everything breaks down again and Hardy comes back in for a bunch of Side Effects into a triple cover. Quen starts dancing and kicks Sydal as JR says there is a pile up in downtown Ringville. Darius gets dumped outside but the referee stops to yell at Hardy, allowing Kassidy to get in a chair shot to Dante. The shooting star press finishes Dante at 11:57.

MJF goes in to see the rest of the Inner Circle and says that Jericho says the match has to happen. Let’s just get through this and move on. Sammy Guevara doesn’t quite buy it but he’s down with the idea.

Ford has Charles Taylor (now the butler), Miro and Kip Sabian with him. Hirsch takes Ford to the mat to start and Ford is in early trouble. Back up and Taylor (under orders) trips Hirsch down. The cross armbreaker has Ford in more trouble but they head outside, with Hirsch getting distracted.

That lets Ford get in a pump kick and a whip into the barricade as we take a break. Back with Hirsch having none of this and kicking Ford away. Hirsch pounds away on Ford to put her down before going up top for a big flip dive onto the men at ringside. Back in and Ford kicks her in the face, allowing Sabian to grab Leyla’s foot for the pin at 8:05.

Post match Miro grabs the mic and makes Taylor say, while looking at Orange Cassidy, that Miro is his best friend now. Cassidy looks crushed and walks away.

Here’s what’s coming next week and at Beach Break.

We’re having a #1 contenders tournament for the Women’s Title. No more details yet.

Kenny Omega and the Good Brothers jump Penta with Omega driving his rather large boot into Penta’s eyes.

Anyone can tag anyone. Jericho drives Sammy into the corner to start but Sammy sends him into the ropes. That’s fine with Sammy, who starts flipping a lot and sends Jericho outside. The big dive is teased but instead Sammy backflips into the Le Sex Gods pose, complete with a middle finger to Jericho. Hager comes in to run Santana over but Santana kicks the legs and head. Ortiz is in as well for a double belly to back suplex before it’s back to Jericho.

A moonsault press gives Santana two and we take a break. Back with Jericho taking Sammy down but Guevara gets over for the tag off to Hager. That means house is cleaned before a quick tag back to Sammy. That means a Cody Cutter to Ortiz and a clothesline to put Jericho on the floor. Everything breaks down and Sammy plants Ortiz with a suplex. The reverse hurricanrana drops MJF and there’s a super Spanish Fly for two on Ortiz.

Jericho teases hitting Hager with Floyd so Hager kicks him in the face. Wardlow slips MJF the ring and gets punched out by Hager for his efforts. Santana and Ortiz kick Hager down but MJF makes a save and tags himself in. A powerbomb sets up the Lionsault….and Jericho doesn’t get nearly over far enough, landing on his head/face instead.

The Codebreaker gets two on Ortiz, who comes back with a double DDT to Jericho and MJF. Hager comes back in for a running Vader Bomb on MJF and a very high Swanton gives Sammy two on MJF. Ortiz makes the save so Sammy hits most of the GTH on Jericho. Wardlow gets knocked off the apron but MJF grabs a quick rollup with trunks to pin Sammy at 12:39. 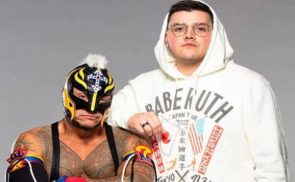