We’re still in the post Final Battle lull, meaning that it’s time for a Best Of show. That may seem a little strange given how little Ring of Honor has been around this year, but at least they do have some interesting options to choose from. If nothing else, another refresher on what the company can do is not a bad idea. Let’s get to it.

The winner gets a future World Title shot. Gangrel blows the liquid in King’s face during entrances and most of the people get in at the bell to start fast. We take a break at the ten second mark and come back, seemingly with nothing having changed, meaning Delirious is running around ringside and King is blindly throwing punches on the floor.

Gangrel suplexes Danhausen and Impales Johnson to put him down. Draper fights off another Impaler and backdrops Gangrel out to a chorus of booing. LSG goes up top to dive at Draper, who throws him out with ease. Draper backdrops out Isom and Crowbar with ease so, say it with me, Cheeseburger eliminates Draper a few seconds later.

Now it’s the Bouncers cleaning house until Meanie gets them to dance, only to have Johnson throw Meanie out. As Amy Rose comes out to get King to the back, the Bouncers beat up Johnson and toss him….only to the apron as PJ Black makes a save. As a result, Johnson throws Black out in a good old heel double crossing. Manic grabs Johnson low and gorilla presses him out as we take another break.

Back again with Maria throwing the Bouncers out at the same time but stopping to hug Danhausen. Young and Maria have a staredown with Silas dropping her but not quite being able to eliminate her. Cue Bully Ray to pull Maria out, allowing Young to celebrate. Ray chairs her in the back and adds a powerbomb through a table (apparently giving her a concussion).

Back in and Danhausen gives Delirious some teeth but then throws them at Delirious, setting up the elimination. Danhausen German suplexes Young but gets tossed out anyway, allowing Cheeseburger to hit a springboard crossbody. Young rolls through and they go to the apron but Woods makes the save. A clothesline eliminates Cheeseburger and we’re down to Williams, Lee, Young and Woods. Young puts Williams on the top so Tracy manages a DDT onto the top turnbuckle.

Woods jumps in front of a spinning forearm so Williams blasts him instead, leaving Young to return the save. Williams gets double teamed in the corner with a slingshot elbow, setting up the easy elimination. Young and Woods stomp Lee down in the corner but Lee sends Young to the apron. Woods kicks him out by mistake and gets tossed, only to have Kenny King run in. Lee survives an elimination attempt, unmasks as Flip Gordon, and dumps King for the win at 20:30.

Post break, Gordon says he’s coming for the title at Supercard of Honor.

From Gateway To Honor.

PCO is defending. They start very fast with Rush knocking PCO and Haskins to the floor back to back. PCO comes back in for the power showdown and knocks Rush outside in a hurry. That means the big suicide dive but Haskins’ version is pulled out of the air for a chokeslam onto the apron. PCO’s big flip dive off the top only hits apron as Rush pulls Haskins out of the way.

We take a break and come back with Rush knocking PCO off of the apron and Haskins hitting a suicide dive. A top rope double stomp hits Rush for two and there’s a PK for the same on PCO. Back up and PCO cleans house with no real problem but Rush suplexes him into the corner.

PCO tackles Rush down but Haskins makes the save with another top rope double stomp. There’s a chokeslam from PCO to Haskins and the PCOsault connects….but Rush pulls the referee out. Cue NWA World Champion Nick Aldis to knock PCO silly with the World Title, allowing Rush to knock PCO into the corner. The Bull’s Horns gives Rush the title back at 10:22.

For the vacant title. They shake hands to start and Williams towers over him. It’s straight to the grappling early on but neither can get a hiptoss. Instead they head outside for a staredown until Williams gets back in and holds the rope open for Gresham. Back in and Williams starts working on the arm but Gresham slips out and we take a break. We come back with no time having elapsed and Gresham starting in on Williams’ arm to take over for the first time. Williams goes to the ropes to get a breather and then chops Gresham right back down.

A cravate of all things gives Williams two and Gresham has to go to the ropes as well. There’s a spear to Williams but he’s right back up with a clothesline in the corner. Gresham hits a suplex with Williams popping up again for another chop. A bridging German suplex gets two on Williams and a collision in the corner puts them both on the floor in a heap.

Back in and Williams gets two off a brainbuster, setting up the Crossface to stay on the neck/shoulder. That means a second rope break from Gresham, who is back with a bridging German suplex of his own. Gresham forearms him down for two more but he can’t get a Kimura in full. Williams is back up with a piledriver for two, with Gresham using the final rope break. They both need a breather and Gresham pulls him into the Octopus for the sudden tap at 14:37.

Post match Jay Lethal comes out to celebrate and respect is shown to end the show. 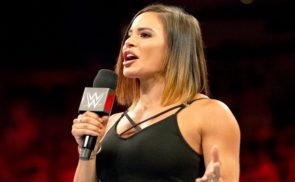