If you would like to watch this show in full, you can see it for free right here:

We’re closing in on Hard Times and that means we should know what the big stuff is going to be around here. Nick Aldis has been the major star and the focal point of the show, as he brings in Scott Steiner to help him deal with the existential threat that is Ricky Morton. We also get another TV Title Tournament qualifying match tonight. Let’s get to it.

We open with a recap of Aldis not being able to beat Ricky Starks and turning down five minutes with Ricky Morton. Then a six man tag was set up to earn Morton a shot, with Aldis bringing in Scott Steiner as his third man.

Here are the Rock N Roll Express for an opening chat. They’ve always put the fans first and that’s why they’ve never minded being #2. The two of them paved the way for today’s tag teams but they’re not crying over spilled milk. Morton has to get up every morning and work to feed his kids, so you better believe he’s coming to work hard to become World Champion. They aren’t saying who their third man is so keep watching to find out.

We get the brackets for the TV Title Tournament

Zicky Dice and Ricky Starks argue about who will go further in the tournament. Starks says he’ll win the title but Dice says the only thing Starks will be stroking are these curls.

They circle each other and go nose to nose with only a shove for contact in the first thirty seconds. A headlock goes nowhere so they ram into each other, followed by Zane hitting a splash in the corner. Zane’s middle rope shoulder gets two but Dave is back with a kick to the face for two of his own. Dave misses a charge though and shoves Zane in the face, sending Zane over the top with chops in the corner. He even goes after Zane’s bad arm but the referee breaks it up, allowing Zane to hit him with the cast for the pin at 3:55.

Zane is screaming in pain after the win.

Breaking News: the NWA invaded Ring of Honor over the weekend. More later.

Ken Anderson and Colt Cabana aren’t happy with their loss last week and seem to blame each other. Anderson is NOT bitter though.

Vox dropkicks her at the bell but Melina hits a running hair bulldog. A missed Cannonball in the corner makes it worse for Vox and Melina bends her neck around the rope. Another comeback attempt is cut off with a kick to the head and Vox is down again. They trade forearms with Vox doing the screaming comeback, only to get caught in something like an Eye of the Hurricane with a legdrop for the pin at 3:07.

Post match, Melina challenges Kay, who comes out and is ready to do this right now. We won’t be, but she’s ready to.

We get more clips of the NWA Invasion with Aldis attacking Marty Scurll and then running away from the threat of a beatdown. The next night, Aldis called out Scurll and security had to break up a brawl. Aldis challenged Flip Gordon for Hard Times.

Pope denies that he is managing Outlaw Inc. See, he’s advising them, which is totally different. He doesn’t like Aron Stevens either because Stevens won’t defend the title. Back to the tag teams, Outlaw Inc. is a real team, unlike Storm and Anderson, who are together because of convenience.

Question Mark now has a flag bearer (also masked of course). Stevens and Kingston start things off with Stevens being sent outside in a hurry. A double suplex gets two on Stevens and it’s Homicide staying in to mock the ka-ra-te. Stevens avoids a charge though and gets to hammer away, including sending Homicide shoulder first into the buckle.

The armbar goes on and it’s a Crane pose elbow to set up…well another armbar actually. Kingston comes in without a tag to save his partner but walks into the Mongrobian Spike. Everything breaks down and Homicide’s arm gives out on the Gringo Killer attempt, leaving him to take another Spike to give Stevens the pin at 4:56.

Dr. Of Wrestling Psychology Austin Idol is ready to teach you how to get heat.

We get the same recap that opened the show.

Here’s Strictly Business and Scott Steiner now has an unidentified title. Aldis talks about how he was warned about the snakes in the business, including Steiner. Now he trusts Steiner, who goes on a rant about hating fat people. The title is the original NWA World Tag Team Title belt, before it became WCW. Tonight, they’re beating up the Rock N Roll Express.

If Team Morton wins, Ricky Morton gets a World Title shot. Latimer punches Drake into the corner to start so Drake reverses into a few right hands to the face. Gibson comes in to work on the arm before it’s off to Storm for more of the same. A neckbreaker gets two so it’s off to Isaacs, who gets clotheslined down in a hurry. Storm kicks him in the face for two more and it’s back to Gibson to work on the arm…for all of two seconds before Drake comes back in.

Isaacs finally gets in a clothesline and Steiner comes in for the first time to chop away in the corner. Latimer grabs a cravate and knees Drake in the face before Isaacs comes in for the chinlock. That doesn’t last long so here’s Steiner for an overhead belly to belly. Latimer is back in for his own chinlock but Drake fights up and hits a running DDT. Gibson gets the hot tag and finally stays in for more than a few seconds with some knees and right hands. Everything breaks down and Gibson rolls Isaacs up for the pin at 9:26. 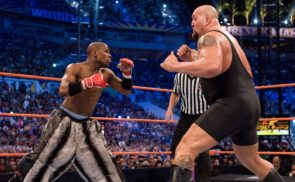