The list has to be filled. We are less than two weeks away from the Royal Rumble and that means it’s time to start stacking up the names. There are sixty names combined in both of the Royal Rumble fields and that means there are a lot of spots left to be filled in. While there are likely going to be a few names saved as surprises, the majority of the lineup is going to be announced in advance. We got a lot closer to that this week.

One of the best things about the Royal Rumble is being surprised. You know most of the names who are going to be included in the field and while that can be helpful, it can be a little annoying to hear so many of the names in advance. With two weeks go, we knew thirteen men and three women so there are a lot of surprises left. After Monday though, there are fewer empty spots left.

This week on Monday Night Raw, five more names were announced for the Royal Rumble, with four men and one woman being added to the field. The men’s match added Rusev, Bobby Lashley, Aleister Black and Buddy Murphy, while Sarah Logan was added to the women’s match, though Logan had announced this on her own earlier in the day. There is no word on how many of the names will be announced before the Royal Rumble.

Here’s quite the preview. Check out Black vs. Murphy in a heck of a pre-Rumble fight: 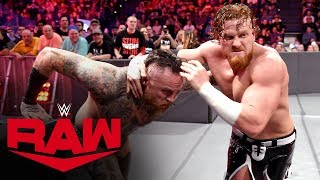 Opinion: I’m rather pleased with the fact that there are so many spots left, but you can all but guarantee that a lot of them will be filled in before the show. There are now thirteen men and twenty six women remaining, which leaves a lot of room to play with come the Royal Rumble. Now just have a good Royal Rumble and maybe throw in a surprise winner and we could be in for something better.

Which of these names is the best? How many surprises do you want for the Royal Rumble? Let us know in the comments below.

So Long And Farewell: Maxwell Jacob Friedman Gives A Big Update On His Future Career Plans