It’s a new year (yes it is) and unfortunately it seems that the experiment of trying something new around here has already come to an end. I’m surprised it took that long actually, as Main Event continues to be either near or at the very bottom of WWE’s television ladder. Let’s get to it.

Tozawa strikes away in the corner to start and snaps off a hurricanrana. There’s a missile dropkick for two and it’s back to the corner to stomp away even more. Slapjack catches him on top with a superplex though and a regular suplex gets two. It’s time to work on the arm with a stomp and some cranking, followed by a neckbreaker for two more. Tozawa is back with another hurricanrana into a Shining Wizard. The top rope back elbow gets two on Slapjack but Mustafa Ali offers a distraction to break up the top rope backsplash. Slapjack hits the Snapback for the pin at 5:05.

We look back at Kevin Owens vs. Roman Reigns in the cage.

Owens unloads on him to start and stomps Uso down with no trouble. They head outside with Owens hitting a backsplash on the floor, followed by another for two back inside. Back in and Owens starts in on Jey’s recently injured leg, including crushing it on the rope. Uso gets in some right hands for a breather and a superkick puts Owens down on the floor. They head outside with Owens hitting his own superkick and throwing him over the announcers’ table. We take a break and come back with Jey shoving Owens off the top. Jey has to bail out of the Superfly Splash though and Owens hits the Stunner for the pin at 7:25.

Post match the beatdown is on, with Owens telling Reigns to come help his family. Jey gets handcuffed to the top rope so the leg can be further destroyed. Owens finally gets tired of the beating and unhooks the cuffs, allowing Jey to stagger up the aisle. That just earns Jey another beating, including a superkick onto a table. Owens loads up something but here’s Reigns to jump him from behind. Jey grabs a chair and the big beatdown is on, with Reigns unloading with said chair. Owens gets sent into various screens and then gets tossed off the stage through a table to finally end the beating.

Orton pokes him in the eye to start and takes it to the floor. That lets him drop Hardy onto the announcers’ table a few times before going after the arm back inside. Hardy hits a clothesline but Orton knocks him out of the corner and hits the circle stomp. The chinlock goes on but Hardy neckbreakers his way to freedom. Orton rolls to the floor so Hardy hits a running clothesline off the apron to send us to a break.

Back with Orton grabbing the chinlock again but this time he puts his finger in Hardy’s ear gauges to pull rather hard. With that let go, Orton drops the knee for two instead. We hit another chinlock before Orton just opts to hammer Hardy down again. Hardy fights up and this time hits a basement dropkick for his own two. There’s the Whisper in the Wind for the same and Orton is sent to the floor for a dropkick through the ropes. The hanging DDT catches Hardy on the way back in though and the RKO finishes Hardy at 12:12.

Gulak is in long tights for a change and Ricochet takes him down by the leg to start. Ricochet’s headlock doesn’t work so they trade rollups for two. Now it’s Gulak getting in a headlock of his own, followed by a sunset flip for two of his own. A slam into the ropes puts Ricochet down again and we take a break.

Back with Ricochet fighting out of a chinlock and sending him outside for the big flip dive. Ricochet has to bail out of a top rope dive so Gulak pulls him into a half crab. That sends Ricochet over to the ropes but the Kick Back is countered into another half crab. Gulak switches that into the STF but Ricochet is out again. Now the Recoil can finish at 10:44.

Lee is challenging and walks through the legends (including Booker T. and Jeff Jarrett) to get here. They shove each other around to start and run the ropes, with Lee not quite getting high enough on a leapfrog. He’s fast enough to drop down as Drew comes back though and then forearm him out to the floor. Lee follows him out and hits the big Pounce to knock Drew over the barricade.

Back from a break with Lee driving in elbows and shoulders in the corner to keep Drew in trouble. Lee slams him down to stay on the bad ribs for two and McIntyre’s belly to belly attempts are blocked. McIntyre finally sends him into the corner though and NOW the belly to belly connects (for some Legends applause). A neckbreaker sets up McIntyre’s nip up but Lee plants him with a spinebuster.

They head outside again with Drew managing a powerbomb off the apron, with Lee’s back hitting the edge of the announcers’ table as he crashes through to take us to a break. Back with the two of them going up top, with Lee hitting a freaking Spanish Fly for two, because he can just do something like that. The Spirit Bomb is countered though and the Claymore retains the title at 21:13.

Post match McIntyre grabs the mic but here’s Goldberg to interrupt. Goldberg says McIntyre has a lot of things going for him, except for respect. McIntyre doesn’t respect those legends so that’s where Goldberg steps in. He isn’t demanding anything like a match at the Royal Rumble, but Drew seems interested.  They go head to head and Goldberg shoves him down….as we cut to Straight Up Steve Austin because we’re out of time. 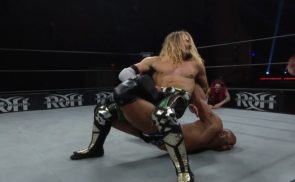