Things are getting interesting around here again as the road to All Out is getting bigger and bigger. The most important thing we seem likely to be seeing is Maxwell Jacob Friedman challenging Jon Moxley for the World Title. I’m not sure how much we will be seeing of that round here, but at least they seem to have a goal in mind about a month out. Let’s get to it.

Tony and Taz give the usual quick preview.

Will Hobbs vs. Scorpio Sky

Hobbs jumps him in the corner to start and hits a spinebuster for two. Sky slips out of a powerslam though and hits a running kick to the back of the head in the corner. The TKO gives Sky the pin at 1:15.

Post match Sky puts a chair in the ring and calls it symbolic. Lately, people have been calling him the king of AEW Dark so this might as well be a throne. Sky does not like the idea of that being his ceiling because he is one of two people to pin Chris Jericho around here. You people have forgotten who he is so say the name and remember it.

Serpentico dives at Billy’s leg to start to no avail. Billy kicking him in the face works a lot better and it’s off to Austin, who runs Serpentico over for two. Serpentico gets him into the corner though and Solow comes in, only to be quickly armdragged. Solow hits a slingshot stomp but Austin kicks Serpentico away. That’s fine though as Solow is right there with a basement clothesline to keep Austin down. Austin sends them into each other though and rolls over for the hot tag to Billy. A missed charge sends Serpentico outside and Austin hits the Fameasser on Solow. The hiptoss neckbreaker finishes Serpentico at 5:26.

Sonny Kiss/Joey Janela vs. The Initiative

Janela’s headlock doesn’t get him very far with Cutler so he grabs a running rollup to send Cutler into the corner. It’s off to Kiss so Cutler ducks underneath him and dives onto Janela on the floor. That’s fine with Kiss, who hits his own dive to take Cutler down with a DDT. A running hurricanrana takes Avalon down but he pops back up to take Kiss into the corner. That doesn’t last long either though as Janela comes in for a Hart Attack. Part of the Motor City Machine Guns’ Dream Sequence gets two as Taz talks about being buried online.

Janela hits a running forearm to knock Avalon up the ramp but misses a charge to send himself into the set, hurting his arm in the process. Back in and Avalon works on the banged up shoulder, followed by more of the same from Cutler. Janela dives for the tag but gets driven back into the corner. As you might have guessed, the hot tag goes through a few seconds later and Kiss gets to clean house. Janela throws Avalon at Leva Bates but takes too long, allowing Cutler to escape.

Cutler gets shoved off the top and into a fireman’s carry from Avalon, allowing Kiss to hit a top rope Blockbuster to take them both down. Avalon is back up with a middle rope Russian legsweep for two on Kiss, followed by Bates hitting a Sliced Bread off the post to drop Janela. Back in and Janela is already up on the apron again, allowing Kiss to make another tag. Janela throws Avalon into an electric chair and Kiss adds the top rope splits splash for the pin at 9:38.

King goes straight at her to start and they head to the mat for the slugout. Abadon is sent outside where she whips King into the barricade. Back in and King is sent face first into the mat, only to come back with a middle rope dropkick. It’s Abadon getting back up first though but King gets two off a release German suplex. Abadon doesn’t mind though as she kicks her in the face and hits the hurricanrana driver for the pin at 4:08.

Angelico and Allie are the seconds. Marshall takes him into the corner for a clean break and they trade wristlocks. Evans flips out of a hiptoss and adds a handstand kick to the face. Taz thinks Tony would be over huge if he could do that as Evans hammers away in the corner. A middle rope spinning crossbody is countered into a suplex from Marshall and they head outside for a bit. Angelico offers a distraction and Evans hits a running flip dive to take over.

Back in and Evans flips around before poking him in the eye, setting up something like an Octopus hold, with Evans hanging in the air off of Marshall’s shoulders. Marshall gets out and counters Evans’ springboard with a powerslam for the big crash. A pop up right hand gives Marshall two but Evans kicks him in the head. The standing corkscrew moonsault gives Evans two and draws Allie up to the apron. Angelico uses the distraction to get in a cheap shot though and Evans grabs a backslide with a flip over for the pin at 8:24.

Post match the beatdown is on until Dustin Rhodes makes the save.

Points for Pillman for getting as much ring time as he can. FTR seems to get some advice from Tully Blanchard before they come through the entrance. Harwood and Pillman start things off and it’s a quick standoff. A wristlock doesn’t last long for Harwood as Pillman flips around and kicks him in the head. After the Hollywood Blonds camera work, Pillman allows the tag off to Wheeler, who chops away rather hard. Pillman is back up with a high crossbody and a superkick, allowing the tag to Garrison.

Harwood pulls him down by the hair but he’s back up with a heck of a right hand to Wheeler. Pillman is back in with a running shot in the corner and an armbar. Wheeler powerslams his way to freedom though and it’s Harwood tying him in the ropes to strike away. A kick to the head almost gets Pillman out of trouble but Wheeler drags him right back to the corner. Pillman slips out of of a gordbuster and rolls over to bring in Garrison….who walks into the Goodnight Express for the pin at 6:20.

Butcher and the Blade vs. Private Party

Butcher easily drives Quen into the corner to start and it’s off to Butcher vs. Kassidy. This time it’s Kassidy being brought into the corner and the beating is on in a hurry. A hiptoss into a dropkick gets Kassidy out of trouble but Blade cuts him off with a hot shot. Butcher comes back in and hits a running clothesline in the corner. The quick tag brings Quen back in though and everything breaks down. Blade is sent outside, where he helps break up Silly String so Butcher can plant Quen to take over again. Some corner clotheslines give Butcher two and it’s time to stand on Quen’s throat.

The chinlock goes on for a few seconds but Quen sends Blade into the middle buckle. The hot tag brings in Kassidy, who mostly misses a springboard Stunner to knock Blade off the apron. A springboard flipping Stunner to Butcher works a bit better and it’s already back to Quen. Butcher gets double drop toeholded onto Kassidy’s knees for a standing moonsault to the back from Quen. Blade shoves Quen off the top for a big crash to the floor, leaving Kassidy to miss his Swanton. The suplex onto Blade’s knees is enough for the pin at 8:48.

Result: Butcher and the Blade b. Private Party – Suplex onto Blade’s knees to Kassidy (8:48)

The Dynamite preview wraps us up. 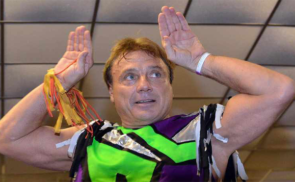 Marty Jannetty May Have Admitted To Murder On Social Media