This was a bit more interesting than usual last week so maybe that can continue this time around. Granted I’ve said that more times than I can count about this show and it never sticks. The empty arena shows have long since lost their charm so I’m not sure how much good this one is going to do. Let’s get to it.

Asuka sends her face first into the mat to start and hits the early dance. That earns her a dropkick and they shout at each other a lot, setting up Carter’s multiple springboard wristdrag. Asuka gets in a kick though and more dancing on the floor ensues. Back in and Asuka stomps away before grabbing the armbar. That’s broken up so Asuka kicks her in the head and grabs the Asuka Lock for the tap at 5:12.

Michael Cole is in the ring to introduce Rob Gronkowski, the host of this year’s Wrestlemania. After a video on Gronkowski, Mojo Rawley comes in to say that’s not hyped enough and handles the real introduction. Gronkowski comes out and dances to the ring, saying he’s ready for the party even in front of no fans. Rawley promises to have his back and front but here’s King Corbin to interrupt. Corbin talks about how we don’t have pads around here but he knows what it’s like to be in the NFL.

Cue Elias to say he wants to sing a song about Corbin, who finally agrees to listen to it. Elias sings while Rawley and Gronkowski dance behind Corbin. With the song over, Corbin gets in Gronkowski’s face but Rawley gets behind him and shoves Corbin over, allowing Elias to throw him over the top. Gronkowski says he can’t make matches, but he thinks Elias should face Corbin at Wrestlemania.

Get used to him:

Here are Roman Reigns and Goldberg to sign the Wrestlemania contract. Cole recaps the events setting up the match and asks Reigns why he challenged Goldberg. Reigns says the greats have challenged him and they’ve all lost, so Goldberg will be the same. Cole brings up a tweet from January when Reigns said it was stupid to headbutt a locker before a match. Reigns says that’s stupid and he took a shot because it made sense. He’s taking the title at Wrestlemania and signs.

Goldberg says he’s been headbutting doors around the world for years and he’ll beat Reigns at Wrestlemania. The contract is signed and the table is turned over, meaning the staredown can end the show. That tweet made this feel less intense and I don’t really buy that these two don’t like each other. Not that it matters though as Reigns is likely holding up the title to end Wrestlemania anyway.

Heyman and Lesnar are in the ring (with the camera now looking at the Titantron for a change), with Heyman talking about how McIntyre can train all he wants. He can get in great shape and spar with mixed martial artists, but he can’t beat Lesnar at Wrestlemania. McIntyre can pray all he wants but God is going to give him a busy signal on this one. Instead, Lesnar will answer his prayers to make it quick, but not painless. At Wrestlemania, McIntyre is another victim, just like everyone else.

Video on AJ Styles vs. Undertaker.

They fight over arm control to start and that means an early standoff. Carrillo rolls over and grabs the ankle, only to get reversed into an armbar. A headscissors gets Carrillo out of trouble and it’s the standoff sequel. Back up and the high angle springboard crossbody gives Carrillo two and the top rope missile dropkick sends Burch outside.

We come back from a break with Burch uppercutting away and hitting a snap suplex for two. The chinlock goes on for a few seconds but Carrillo is up in a hurry with an enziguri. Burch’s German suplex gets two but Carrillo dropkicks him down. The moonsault finishes Burch at 7:45.

Here’s Randy Orton to answer Edge’s challenge. A few weeks ago he told Beth Phoenix that her husband is an adrenaline junkie. That’s all Edge is and that’s why he’s still here. About eighteen years ago, Orton debuted on the main roster and won the Intercontinental Title. Then he took the torch from Mick Foley at Backlash 2004. Was any of that handed to him? He has become the most dangerous name in wrestling and now Edge is questioning his grit.

Orton doesn’t think grit is sitting on your couch for nine years. Instead, grit is longevity and becoming the one constant in WWE for all those years. Orton has heard Edge’s challenge for a Last Man Standing match and at Wrestlemania, he is ending Edge’s story. He accepts to end the show. 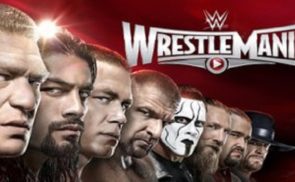