That clears things up a little bit. With WrestleMania being such a mess on so many levels, there are going to be some mixed messages on the way to the show. That is going to cause some confusion and while we won’t know everything until this weekend, we can get an idea of what to expect. Sometimes that has to be adjusted though and that is the case with a pretty big match.

There are a lot of things that have to be put onto a WrestleMania card and this year’s show is even more complicated than most. Since there are so many factors to deal with this time around, you have to get in a few important pieces. One of those pieces was set up on last week’s SmackDown, but things were forced to be changed due to injury. It turns out that they were changed to something else than what was previously reported.

Last week, reports from Wrestling Observer Radio said that the SmackDown Tag Team Title match, originally booked as a triple threat ladder match, was changed into a singles match, possibly for the titles, with New Day left out. However, according to the same source, the match will be a triple threat singles match, featuring a single member each of the Miz and John Morrison, the New Day and the Usos. It is not clear if the match will be a ladder match or if the titles will be on the line.

It was a big setup. Check out how we got to this match:

Opinion: This makes more sense and is the kind of thing that we should be getting in this situation. A triple threat ladder match among the three wrestlers would be fine, but I’m not sure if that is what we are going to be getting. Hopefully they do what makes sense around here as this could get screwed up in a hurry if they go the wrong way. I know it’s a messy situation, but getting it right is always a better move.

How do you see the match going? Who should leave with the titles? Let us know in the comments below. 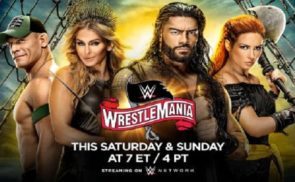