CM Punk and Jon Moxley are going to war for the AEW World Championship, presumably on September 4 at All Out. But in an odd twist, they’ll first do battle on the August 24 edition of Dynamite. The twist came on the August 17 Dynamite, as the two cut blistering promos on each other. Those promos were followed by a brawl, a pull-apart, and yet another brawl. Then, the match was announced.

But the big headline coming out of AEW’s Wednesday program wasn’t Punk versus Mox. It was Punk’s “challenge” to former AEW World champion Hangman Adam Page. While that story continues to circulate, the fact is that fans shouldn’t look past Punk and Moxley.

The Champ is Here

Punk’s return from injury on August 10 was inevitable, but it still caught fans by surprise. The champ came back seemingly to Moxley’s defense, but it soon became clear that Mox didn’t want Punk’s help. It was apparent that the two men would face off for the AEW World title.

Punk and Mox are perfect opponents for each other, thanks to their history, as well as their personalities. This is a bout that would be a main event in any company, anywhere in the world.  It’s a match that has to happen and now, it’s booked twice. It will surely deliver, and fans will almost certainly go home happy. But this story likely won’t end there, because of CM Punk’s issues with Hangman Page.

According to F4W Online, those issues go back to their feud leading to the title match at Double or Nothing on May 29. Punk didn’t like what Page had to say about him during a promo, and decided to return the favor on August 17. Punk’s comments toward Page were evidently not planned, and the champ supposedly went into business for himself. So what does all of this mean? 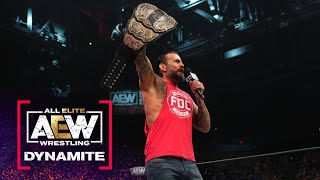 Longtime fans understand who CM Punk is. The Chicago native is a lightning rod for controversy and that’s true despite what company he works for. He’s perceived to be a “bad” guy, depending on the situation, and his critics believe that’s who he actually is, apart from the business. August 17 was just further proof of that.

Does Punk have a legitimate reason to be upset at Page? If so, does that even matter? Shouldn’t Punk just suck it up, be a professional, and do business? The Second City Saint is no saint, that much is clear. But just because he’s currently holding the AEW World Championship, does that mean he should be infallible?

Is CM Punk supposed to be a shining example of what a world class main event star should be? He is a veteran, after all. He’s traveled the world and he’s reached heights that most professional wrestlers can only imagine. Shouldn’t he be the locker room leader, and hence, the consummate pro, every time he’s on camera? Many would say yes. But then again, many wouldn’t like or respect Punk, despite how he handles himself

Best in the World 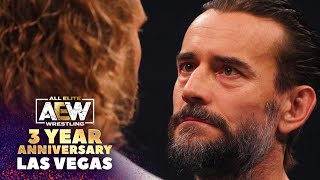 Perhaps CM Punk is just too easy to hate. Then again, maybe he makes it too easy to hate him. He will undoubtedly go down as one of the best talkers the industry, and his Hall of Fame resume is rife with match of the year candidates. But in the end, it’s the guy behind the accolades that gets all the attention.

However the real story here is not the rematch with Page that is reportedly not happening. This is about Punk versus Moxley, which is now unfortunately feeling like the forgotten headline. But it’s not AEW burying the lede. Social media and pro wrestling websites are doing that work. In fact, the spotlight doesn’t even appear to be shining on the August 24 title match at all. But maybe that’s the point.

Maybe Page versus Punk is indeed going to happen after all. Is Hangman just not going to answer Punk? Are fans to believe that one of AEW’s top babyfaces, and former world champion, is just going to sit back and accept Punk calling him a coward on live TV?

Even if AEW didn’t know that CM Punk was going to call Page out to the ring, that doesn’t mean Hangman will not be allowed to answer, if only to save face. It could even be that Page will interfere in the match between Punk and Mox, leading to a triple threat at All Out. But even if that doesn’t happen, fans still have a major world title bout coming on August 24.

Without the Hangman controversy, Punk versus Mox is the top story, and that’s exactly what it should be now. In Punk’s absence, Jon Moxley has defended the AEW World Championship, he’s been in one bloody battle after another, and he’s always brought everything he had to the title. Moxley went from being a punchline in a company that didn’t know how to use him, to being a top guy, and the man to beat, in AEW.

Mox has earned his spot, and there is no debating that. He’s also a future Hall of Famer, and there’s certainly more for him to do in the business. Jon will bring the pain against Punk, and he will take as good as he gives. 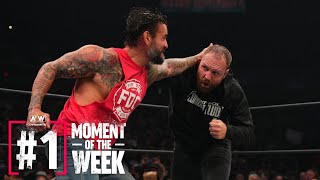 The Best versus The Brawler

CM Punk is a big fight performer. He consistently works as though he’s got something to prove, and that attitude keeps his matches not only entertaining, but edgy as well. Punk is a guy who believes he’s at the top of his game and when he’s on a roll in the ring, it’s hard to dispute that claim.

Moxley and Punk compliment each other in the ring, and they both want to be the toughest in the company. When the bell rings on August 24, the switch will flip, and it’s down to business. Despite the barbs thrown at each other in promos, Punk and Mox are pro wrestlers. They both understand how to play the game, and they’re both very good at it.

CM Punk versus Jon Moxley will surely deliver. It’s a match that fans have been waiting to see and when it goes down, it will undoubtedly steal the show. Punk and Mox are two of AEW’s best and, whether Hangman Page is a factor or not, they will prove it again on August 24. 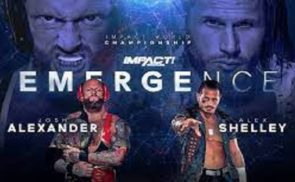 REVIEW: Impact Wrestling Emergence 2022: They Got Me