Rumor: Stephanie McMahon May Appear on TV More in 2013

Rumors are spreading throughout the internet that WWE Executive Vice President of Creative, Stephanie McMahon, may be appearing more on television during the course of the year.

McMahon has been making sporadic television appearances since 2010, but not more than once or twice a year. The last time McMahon was a constant face on TV was during her Raw General Manager run from 2008-2009. While it is unconfirmed as to when, or if, McMahon will begin appearing on camera more regularly soon, WWE.com has posted a new entrance video for the “Billionaire Princess” that you can view below. 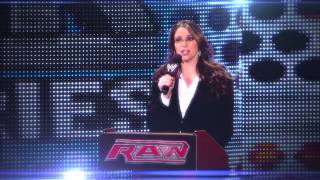