I have nothing else to say, except that this was a war. WWE has posted a new video to its YouTube channel in which they show the full match between Triple H and The Undertaker from Wrestlemania 27. The two legends competed in a No Holds Barred match.

The King of Kings came to WrestleMania XXVII to do something that no man has ever done before. In front of more than 70,000 screaming fans in Atlanta’s Georgia Dome, he planned to walk into the ring against The Undertaker and walk out as the only man to ever defeat The Last Outlaw on The Grandest Stage of Them All.

It was a showdown every bit as epic as expected — two Superstars who defined an era in WWE clashing in a battle for the ages. But Triple H’s obsession with burying The Deadman was not to be. Just like 18 other brave souls did before him, The Game fell to The Undertaker at WrestleMania, becoming No. 19 in the most legendary streak in all of sports-entertainment.

When The Game grabbed his sledgehammer, it looked like the most famous streak in all of WWE was about to come to an end. That’s when The Undertaker locked in Hell’s Gate. Trapped in the horror of this punishing maneuver, The Game fought hard to escape, but his battered body could take no more. After making one final attempt to break free, Triple H finally lost his will and gave in, tapping twice on The Undertaker’s thigh to signal the end.

Fireworks exploded and a giant “19-0” flashed across the Georgia Dome as the bell rang, but there were no celebrations. Instead, two of the greatest warriors in the history of WWE lay motionless in the center of the ring, their bodies exhausted after the war the WWE Universe just witnessed.

The Deadman may have won the bout, but it was The Game who rose to his feet.

As Triple H defiantly walked back up the entrance ramp, Undertaker attempted to stand, but collapsed in a heap on the arena floor. The Phenom was so battered after the night’s confrontation, he could not exit under his own power and had to be carted away from ringside. It was a shocking sight. Not only did it remind the WWE Universe that The Deadman is most certainly a mortal, but it made it clear that “The Streak” was nearly ended on this remarkable night.

I remember this match vividly as it was an incredible show of storytelling and emotion. More importantly, however, it would lead to “The End of An Era” one year later, in a Hell in a Cell match that will be remembered for a long time to come. 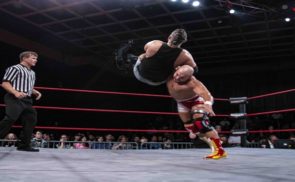