Welcome to what might be the norm for a long time to come as we’re at the Performance Center with no fans in attendance. That’s going to be interesting as we’re building towards Wrestlemania at the same time, even though there’s a very good chance the show won’t be happening. Let’s get to it.

HHH welcomes us to the show and explains that we’re in the Performance Center. The wrestlers trained here and tonight they’re here to perform.

Here are Sasha Banks and Bayley to open things up and they tell Cole and HHH to quiet down and cut the music. They want to know where Paige is but Cole says she has had travel issues. HHH: “I don’t know about you guys but I’m sick of his excuses.” Cue Alexa Bliss and Nikki Cross to challenge them to a match, as it might get the Kabuki Warriors’ attention. Bayley says get a referee out here.

Cross kicks Bayley in the corner to start and it’s off to Bliss for the knees to the ribs. Everything breaks down in a hurry with Banks having to pull Bayley away from Twisted Bliss. A baseball slide sends Bayley into the announcers’ table and we take a break. Back with Bliss in trouble as Cole explains what a promo class is. Bliss gets two off a rollup but gets suplexed into a chinlock.

As HHH asks the producer to feed him pop culture references so he can be like Mauro Ranallo, Bliss powers up but gets clotheslined right back down. Bayley gets knocked off the apron and the missed knees in the corner allow the hot tag to Cross. House is cleaned, with HHH calling it “Vintage Cross, eh Cole?”. Everything breaks down again and here’s Asuka to send Bliss into the steps. The distraction lets Banks hit the Backstabber into the Bank Statement for the win at 10:59.

Asuka dances on the ramp in celebration.

Here’s Roman Reigns for a sitdown interview. Reigns says it’s weird to not have people here when wrestling is built on a reaction. We quickly move to the Goldberg match, with Reigns asking if he can main event a small town in front of 5000 people, why shouldn’t he be in the biggest match of the year? Goldberg has said that he is going to bulldoze Reigns, but since Goldberg went to Georgia, he might not be smart enough to operate a bulldozer. Reigns calls Goldberg a part timer while Reigns has been bred to do this his entire life. At Wrestlemania, Reigns is setting this place right.

The real interview is with Jeff Hardy but King Corbin interrupts to ask what Hardy has in store for tonight. Maybe he can walk a straight line, recite the alphabet backwards or reach out his finger and touch his nose. As it turns out, they’re fighting tonight, which Corbin somehow didn’t know. Hardy leaves so here’s Elias with a song, but Corbin walks off.

Bryan comes up to Gulak in the back and says his neck is still sore from Elimination Chamber. If Gulak is still willing to teach about Bryan’s weaknesses, he’s willing to learn. Zayn and company come up to laugh a lot and it’s Bryan vs. Cesaro tonight.

From Elimination Chamber (only clips are shown but here’s the full version).

Miz and Morrison are defending and it’s Gran Metalik/Lince Dorado for the House Party. New Day (with white paint by numbers gear) is in at #1 and the Usos are in at #2. Some quick trash talk sets up the fight with Kofi dropkicking Jimmy, only to get punched down by Jey. Kofi slips off a springboard and falls onto Jey for two but goes up again anyway. This time Big E. has to break up a double superplex and it’s a standoff until Lucha House Party in at #3 (after about three and a half minutes instead of the announced five).

The Luchas pick up the pace, including the Golden Rewind and the missile dropkick into three straight moonsaults for two on Jimmy. Big E. throws Dorado and Metalik over the top for back to back crashes, followed by launching Kofi onto both of them. Back in and Kofi jumps over Big E. but misses a double elbow, leaving Big E. to go outside. Dorado tries a springboard onto the Chamber wall but slips, with his foot going through the chain.

Thankfully he doesn’t break his leg and is fine enough to climb on top of a pod. Kofi follows him for the slugout with Metalik joining him to knock Kofi down. The Luchas hit big flip dives and Miz and Morrison are in at #4 (as the time continues to be WAY off). Dorado gets double spinebustered down and Morrison’s standing shooting star press gets two, with Metalik making the save. Miz and Morrison tie Metalik in the Tree of Woe and kick away, followed by a double DDT for two on Jimmy.

Jey gets caught in a neckbreaker/springboard double stomp combination for two more, followed by a spinning Razor’s Edge slam for the same on Dorado. Metalik goes on top of a pod and snaps off a great looking hurricanrana to Morrison for another near fall. Kofi is back in with the Boom Drop to Miz but Trouble in Paradise misses. That means the spinebuster/Flying Chuck combination for two more but Big E. is back up for a powerbomb/top rope knee to the chest combination for two on Miz.

Heavy Machinery is in at #5 and starts wrecking things before stopping cold in a weird moment (someone might have missed a cue). Big E. gets crushed by Tucker and Otis and the Caterpillar gets two….as Dorado is hanging from the top of the Chamber. He pulls himself up for a shooting star onto everyone but Heavy Machinery for the spot of the night. The Compactor finishes Metalik at 17:14 and it’s Ziggler and Roode in at #6 to complete the field.

Miz and Morrison help them beat down Heavy Machinery and the fans start cheering for Otis again. Tucker fights back so Otis goes after Dolph, sending him up to the top of a pod. That means Tucker follows him up and throws him onto Otis, who drops him throat first onto the top rope. Tucker flip dives onto New Day and the Usos, leaving Roode and Ziggler to jump Otis.

The fans are glad to see them leave and it’s down to New Day, the Usos and Miz/Morrison. The champs get stared down by all four of them and the beatdown is on in a hurry. Miz and Morrison are sent over the top and it’s a superkick to Big E., followed by a pop up Samoan drop for two on Kofi. Big E. comes back to clean house so Kofi can go on top of the pod, only to miss a high crossbody. Miz and Morrison come back in to steal the pin at 29:04, leaving us with the Usos vs. the champs. Double superkicks give the Usos two but only one Superfly Splash connects, with the other hitting knees.

That means a double near fall as they thankfully didn’t manage to screw up the Elimination Chamber as well. Miz sends the Usos into each other and hits the Skull Crushing Finale for two on Jimmy. The Figure Four goes on and Morrison takes care of Jey, setting up Starship Pain at the same time. Jey breaks up the cover with a rollup for his own two but it’s a Miz rolling Jey up with feet on the ropes and Morrison grabbing the legs (totally legal) to retain at 32:53.

Here are Miz and John Morrison in the ring to brag about their title win. They ask if anyone thinks they aren’t the greatest team ever, but they get into a bit of a disagreement about whose movie was better. No one comes out to interrupt so they hit their singing chant.

Since we’re shorthanded, HHH is running the camera.

We look at the announcement on Backstage of Rob Gronkowski possibly signing with WWE.

Sami is on commentary and Nakamura is at ringside. Bryan starts kicking away in the corner but Cesaro uppercuts away to get himself out of trouble. We take an early break and come back with Bryan fighting out of a chinlock but getting thrown down for his efforts. Bryan fights back with the moonsault out of the corner into the running clothesline. The Crossface goes on but Bryan reverses into a rollup for the pin at 6:29.

Post match the beatdown is on, with Gulak not being able to make a save. The numbers game leaves Gulak laying but Bryan makes the real save with a suicide dive to send the villains running.

HHH helps Cole by coloring in his facial hair.

Elias is on commentary. Corbin jumps Hardy during the entrances and takes it outside before the bell rings. We officially get going with Jeff fighting back and hitting the basement dropkick into the twisting Stunner but Corbin shoves him away. HHH: “Corbin must have hit him pretty hard because he was trying to fire this crowd up.” Elias gets up with his guitar, allowing Hardy to hit the Twist of Fury (Twist of Fate into a swinging neckbreaker. HHH: “Whatamaneuver!”) into the Swanton for the pin at 2:21.

HHH talks about how WWE has earned the right to say THEN NOW AND FOREVER.

Six years ago, Wyatt lost and got lazy but blamed Cena instead. Cena never gives up and some people say it’s because he wins a lot. That’s true, but what about all of his big losses to Miz, Rob Van Dam, CM Punk, The Rock, Brock Lesnar and others? It’s because Cena always keeps going and rising up again without blaming everyone else. So how does he respond to Wyatt? Give him a chance and he’ll give the Fiend an Attitude Adjustment.

After we look back to two weeks ago with the start of Cena’s promo about not wrestling at Wrestlemania, Cena says that he’s facing Bray because he wants to invest in the future. People like Drew McIntyre, Tommaso Ciampa, Matt Riddle and Velveteen Dream deserve the chance instead of giving Bray his fifth or sixth chance. Wyatt pops up in an empty seat and says Cena can say this while having everything. A lot of people want to imagine what it’s like to be Cena for one day.

In reality, Cena is the sick one because no one believes that it’s about the future. Cena will smash and bury everyone as long as he gets the spotlight. He craves it like an addict and even fiends for it. Six years ago, Cena took something from Bray and he’s thought about it a lot since. He wanted to crush his brain for five seconds of peace from the voices but then he started listening. Those voices became a fun house and he was put back together as the Fiend. At Wrestlemania, it’s going to be a slaughter. Let him in. 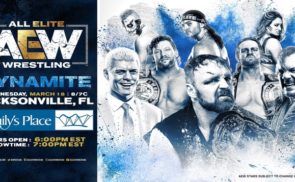