It was the end of one of the greatest careers of all time. WWE has posted a new video to its YouTube channel, in which they show the full match between Shawn Michaels and Ric Flair from WrestleMania XXIV (24). It was here that The Heartbreak Kid defeated The Nature Boy and ended his legendary career.

After a grueling match between two of the greatest of all time, Michaels was ready to hit Flair with his patented Sweet Chin Music. However, there was a hesitation from HBK as he knew that if he were to connect, it would be the end of arguably the greatest career of all time. However, Michaels knew that it would be what Flair wanted, and after one of the most iconic moments in the history of WrestleMania (I’m sorry. I love you.), HBK connected with his finisher, and the rest is history.

I still get the feels when I see HBK deliver that iconic line and end Flair’s career. The aftermath of The Nature Boy crying in the ring and hugging his family is one of the greatest moments in the history of WrestleMania. 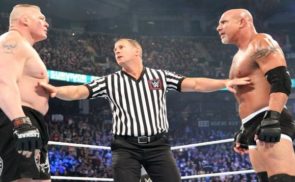