Look at him now. WWE has posted a new video to their YouTube channel in which they show John Cena’s full debut match against Kurt Angle from the June 27, 2002 episode of Smackdown.

Cena takes him outside and keeps hammering away before a running splash gets two. Kurt picks the ankle and snaps off the first German suplex to put both guys down. A rollup gets two for Cena but Angle blasts him down with a clothesline. They’re certainly going hard out there and it’s working so far.

Cena throws him off to break a front facelock and gets two off a good looking spinebuster. The Angle Slam is countered into a DDT for some near falls (Taz: “RUTHLESS AGGRESSION! THERE IT IS!” Is that what it is? Multiple pinfall attempts?) and a powerslam gets the same. Kurt finally has enough and grabs a double chickenwing rollup for the pin.

I always love seeing this match as it is a great reminder of how far he has come in the last 19 years. Who would have thought that he would have gone on to become one of the top WWE superstars of all time? 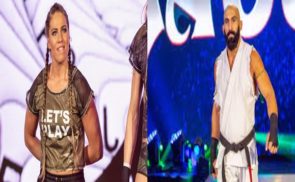