We’re done with Hell In A Cell and that means it is time to get ready for Money in the Bank. A bunch of the ladder match spots have already been filled so it is time to start hammering out the rest of the field. Throw in Roman Reigns needing a new challenger and we could be in for a packed show. Let’s get to it.

We open with a recap of Roman Reigns beating Rey Mysterio in the Cell last week.

Paul Heyman tells Roman Reigns that the Mysterios are acknowledging him from their hospital beds. Jimmy Uso comes in so Reigns asks where Jey is. Jimmy called him a hundred times and finally got through to him, but Jey isn’t coming back. Reigns isn’t happy, but Jimmy says he’s got Reigns’ back. He says he can do everything Jey can, but Reigns doesn’t look convinced. Jimmy needs to prove himself.

Here is Bianca Belair to say we are three weeks away from leaving the Thunderdome and coming home. Tonight she gets to beat up Bayley again, because she has worked so hard to be here. She looks at the title and knows the work has been worth it, because she didn’t let a Bayley, or a bully, get to her. Everyone at home who is dealing with their own bully can make it too, but here is Seth Rollins to interrupt. He is VERY happy with beating Zazzaro, and he did better than Belair did against Bayley.

Rollins holds his hand up for a celebrating with Belair now, since she is going to be on the mat after the match. Cue Bayley to say the fans deserve a champion who doesn’t brag, so the staredown is on. Rollins offers a distraction so Bayley can jump Belair but Cesaro comes out to send Rollins flying. Bayley yells at Cesaro but Belair comes in to clear her out too.

Cesaro takes Rollins down to start and drives him into the corner to it’s off to Bayley vs. Belair. The beating is on again and it’s already back to Cesaro, who cuts Rollins down with an uppercut. Cesaro gets sent into the middle buckle with a Downward Spiral though and Rollins grabs the chinlock.

Back up and Cesaro hits some uppercuts, only to get snapmared into a kick between the shoulders. A backflip gets Cesaro out of a suplex attempt and it’s back to Belair for a pair of nipups with a dropkick in between. Belair’s standing moonsault gets two but they head outside with Belair getting posted. We take a break and come back with Bayley working on the arm and slamming Belair down for two. Belair powers back up and brings Cesaro in to clean house, including the Swing to Rollins.

The springboard spinning uppercut gives Cesaro two but a Bayley distraction lets Rollins hit Cesaro in the back of the head. Belair makes a save of her own, prompting Rollins to say Belair and Cesaro are what’s wrong with this place. It’s back to the women with Belair’s spinebuster getting two as the guys fight on the floor. The KOD is loaded up but Rollins comes in to break it up. Bayley hits a running knee to set up the Rose Plant for the pin at 12:03.

Jimmy Uso is waiting outside of Roman Reigns’ dressing room when Paul Heyman comes out. Uso wants to know what Reigns means by proving himself, so Paul explains that Jimmy needs to be Main Event Jimmy Uso to help Reigns. Heyman says Reigns understands winning, so Jimmy needs to win a match. Jimmy says he has this, so Heyman goes to get the match made, while offering a threat if Jimmy loses.

We get the official coronation of Shinsuke Nakamura as the new King of WWE. Rick Boogs handles the guitar playing and the introduction. Nakamura receives his crown and we head to the back, where Baron Corbin can’t talk about this.

Sonya Deville and Adam Pearce are enjoying the guitar playing when Seth Rollins comes in. Rollins thinks he is ready to face Roman Reigns next, as tonight we will be having the State of the Universal Title. He has never been more ready, but Pearce and Deville aren’t ready to make that decision. Rollins: “The time is now.”

Video on Otis’ path of destruction.

Non-title and Commander Azeez is here with Crews. Big E. drives him into the ropes to start and sends Crews outside in a heap. Back in and Big E. charges into a boot in the corner but comes right back with a clothesline. They head to the apron with Crews hitting a Death Valley Driver to send us to a break.

We come back with Big E. fighting out of a chinlock but getting dropkicked down for two. The chinlock goes on again but Big E. powers up, only to have his belly to belly broken up. Big E. gets back up again and this time the Warrior Splash connects. The Rock Bottom out of the corner is countered though and Crews rolls some German suplexes.

That doesn’t last long as Big E. grabs a Stretch Muffler, sending Crews over to the leg for the break. An enziguri rocks Big E. so Crews goes up and gets two off a frog splash. An arm trap German suplex gives Crews two more and Big E. is sent outside. Azeez whips him into the barricade and loads up the Nigerian Nail….but gets caught just in time, meaning it’s an ejection. Back in and the Big Ending finishes Crews at 12:57.

We look at the banged up Kevin Owens losing to Sami Zayn.

Sami Zayn is VERY happy about his win and talks about how there is order to the chaos of the universe. This might be the greatest moment of his life….until he is told he is facing Kevin Owens in a Money in the Bank qualifying match next week. Sami storms off, declaring this the worst week of his life.

Post break, Sami asks Adam Pearce what is going on here and thinks he should just be in Money in the Bank. That’s a negative, because he has to qualify. Sami asks one more time but it’s off the table, which he describes as playing a very dangerous game.

Here is Sonya Deville to announce the first entrant in the women’s Money in the Bank ladder match: Carmella. Cue Carmella to say she’s happy with this but wants to be introduced as the Most Beautiful Woman In WWE. That brings out Liv Morgan to says he should be in the ladder match instead but Carmella says the match is for the stars. The fight is on but Deville says they can just have a match.

Joined in progress with Carmella in control on the floor as Sonya Deville watches at ringside. Back in and Carmella sends her into the corner for a slow superkick. Morgan is right back with Oblivion for two as Carmella gets a foot on the rope. Carmella grabs a middle rope hurricanrana but Morgan rolls through into a cradle for the pin at 3:15.

Bobby Roode is here with Ziggler. Uso starts fast with an enziguri but gets punched into the corner. Ziggler’s big elbow sets up a chinlock but Jimmy fights up without much trouble. Ziggler is sent outside so Jimmy can dive onto Roode, only to get caught in a Zig Zag onto the steps (egads) as we take a break.

Back with Ziggler hitting another Zig Zag for two and the frustration sets in. They slug it out from their knees with Uso using the headbutts but getting punched into the ropes. The Zig Zag is countered into a powerbomb which is countered into a sunset flip for two. Uso is right back up with a superkick for the pin at 9:43.

Uso heads to the back where Roman Reigns seems pleased but doesn’t say anything. Reigns heads towards the ring and Jimmy goes to follow him but Paul Heyman cuts him off.

Next week: Kevin Owens vs. Sami Zayn in a Last Man Standing Money In The Bank qualifying match.

Here are Roman Reigns and Paul Heyman for the State Of The Universal Title Address. We see a video on Reigns beating Rey Mysterio in the Cell, plus Reigns beating up Dominik for a bonus. Heyman talks about all of the people that Reigns has beaten up, including the Fiend, Cesaro, Kevin Owens, Braun Strowman, Edge, Daniel Bryan and Rey Mysterio. Reigns has cleaned out the division, so now he needs to make an announcement.

Before he can speak, cue the returning Edge to jump Reigns and the fight is on, with Edge knocking Reigns outside. A clothesline off the apron lets Edge send Reigns face first into the announcers’ table over and over. Back in and Reigns hits a Superman Punch to cut Edge off. Reigns goes for a chair but walks into a spear. Edge loads up the Conchairto but here is Jimmy Uso to cut him off. That earns Jimmy a spear through the barricade as Reigns and Heyman escape. Edge: “WHERE YOU AT ROMAN???” Posing ends the show. 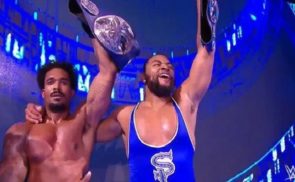 More Names Qualify For Money In The Bank Ladder Matches