The viper strikes again. WWE has posted a new video to its YouTube channel in which they show the full match between Drew McIntyre and Randy Orton for the WWE Championship from Hell in a Cell 2020. The match was contested in the structure of the same name.

Orton controlled the battlefield with his signature deliberate pace, carefully calculating every move. McIntyre found a way to rally with a series of belly-to-belly throws, including a third that sent Orton crashing into a table.

But The Viper’s plotting didn’t relent, and he used bolt cutters to escape the cell and began scaling it moments later, challenging McIntyre to pursue him. That appeared to be Orton’s plan all along, as he retrieved a lead pipe atop the cage, though McIntyre ducked his wild swing to thwart this particular scheme.

While climbing down, both men struck each other repeatedly while clinging to the cell. Unable to hold on, McIntyre careened down through the announce table. Likely suffering from internal injuries, McIntyre gasped for air while a sick grin appeared across Orton’s lips.

After returning to the ring, the champion dug deep and nearly caught lightning in a bottle once again, countering an RKO attempt into a backslide pin reminiscent of their first WWE Title clash at SummerSlam, but it only netted a two-count.

McIntyre found the will to deliver a Claymore, though Orton demonstrated his veteran ring presence, rolling out to prevent a possible pin. After dragging Orton back into the ring, McIntyre attempted a second, but Orton dodged it and planted him with a vicious RKO for the victory.

This was awesome in every way. WWE did the absolute best that they could during the pandemic, and every superstar stepped up their game and attempted to deliver a performance that was equally as good as if crowds were in attendance. Congratulations to both performances on their professionalism in an excellent match! 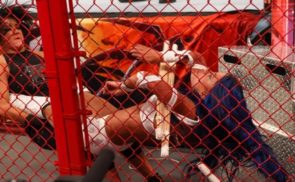