The Game told Mike Greenberg that he is challenging Pat McAfee to face Adam Cole in a 1-on-1 match at the upcoming pay-per-view. This is a result of an altercation that occurred on “The Pat McAfee” show a few weeks ago, when Cole eventually stormed off of the set during a live interview.

Check out Triple H’s appearance on “Get Up” this morning:

The tension between Adam Cole and Pat McAfee took center stage, and it cost The Undisputed ERA dearly. Cole left Bobby Fish & Kyle O’Reilly’s corner to ultimately confront McAfee, who had been disparaging Cole within earshot on commentary throughout the bout. The situation was enough to distract O’Reilly’s attention away from the ring, allowing Imperium to drop Fish with the European Bomb to retain their titles.

But the action was far from over. Despite several officials, including Triple H and NXT coach Shawn Michaels, trying to split them up, McAfee, a former All-Pro NFL punter, caught an unsuspecting Cole with a brutal punt kick, leaving him out cold.

Here is the altercation that took place on NXT last evening: 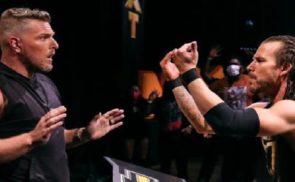