You think you know him. Ever since Edge won the 2021 Royal Rumble, the world knew that he would be in the main event of WrestleMania 37. The only question that remained was who he was going to face. Tonight at the Elimination Chamber pay-per-view, that question was answered.

Edge has chosen to challenge Roman Reigns for the Universal Championship at WrestleMania. He made his intentions known by hitting Reigns with a spear following a successful title defense against Daniel Bryan.

Returning from injury, Edge started this year’s Royal Rumble Match at No. 1 and outlasted 29 other Superstars to earn the right to challenge the World Champion of his choosing at The Showcase of the Immortals.

In the wake of his Herculean effort, The Rated-R Superstar traveled to Raw, NXT, and SmackDown to scope out the World Champions before declaring that he would not announce which World Champion he would challenge until after WWE Elimination Chamber. He then showed up on SmackDown, getting involved in the main event before taking a Spear from The Head of The Table.

At WWE Elimination Chamber, Daniel Bryan outlasted five other Superstars to earn the right to face Reigns for the Universal Title immediately after the career-altering contest. With the Leader of the The “Yes!” Movement nowhere near 100 percent, The Big Dog emerged triumphant over Bryan in swift order. However, as Reigns was beginning the celebration, The Ultimate Opportunist struck with a devastating Spear on Reigns out of nowhere. Looking over the fallen titleholder, the WWE of Famer pointed to the WrestleMania banner and declared that he will challenge Reigns on The Grandest Stage of Them All. 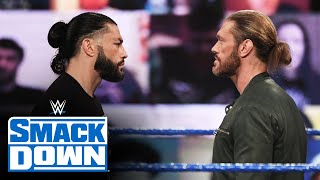 No surprises here, as this match has been rumored for a long time. However, it doesn’t change the fact that want to see it, as two generations of competitors will collide for the first time. Two of the greatest of all time, spear vs. spear. It doesn’t get much better than this!