The Game is back. WWE issued the following press release today, regarding Triple H and his executive role within the company:

“I look forward to returning to my prior position as head of Talent Relations. I’m healthy, fired up, and ready to take charge,” said Levesque.

Triple H replaces John Laurinaitis, who has been on administrative leave since June 21 due to his involvement in the recent scandal involving Vince McMahon. McMahon currently under investigation for paying several million dollars in hush money to cover up inappropriate relationships that he had with women in the past.

It had been reported that several members of the WWE roster were “very happy” when Laurinaitis was placed on his administrative leave.

The Game has been battling several health issues recently, including a cardiac event last year that forced him to step away from his duties within WWE.

This is fantastic news for everyone involved. Not only is it wonderful to see triple H healthy and back at work, but it sounds like this will also improve morale in a company that so desperately needs it. I’m very much looking forward to seeing what happens with the company and the rest of the calendar year! 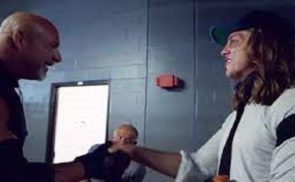 WRESTLING RUMORS: WWE May Be Hinting At A Long Teased Match