Pro wrestling legend Lance Storm has returned to WWE as a producer, and was interviewed backstage at SmackDown. Storm stated that it is “really great to be back” in the company, and it has “been a long time.” As a producer, Storm stated that his role is mentoring, advising, and “letting people pick his brain” for the most part.

Storm stated that, based on the new crop of talent, he is really looking forward to working with Shorty G, who he has been a fan of since he was competing in NXT. Storm also wished that their “timelines lined up better,” so he could have competed against Shorty G in his prime.

EXCLUSIVE: "I would have loved to have been in the ring with him in my prime."@LanceStorm talks about rejoining WWE as a producer and reveals which emerging Superstar he would want to battle if he ever stepped back in the ring. pic.twitter.com/U224aVkpQh

Regarding a possible return to the ring, Storm replied, “Never say never, but I would have like to have been in my prime when I’m in there with [Shorty G]. I don’t think I could keep up as well as I used to, but, there’s so many talented people here, and it’s just great.”

On August 9, Storm announced that his wrestling school, Storm Wrestling Academy, will be closing down at the conclusion of 2019 after nearly 15 years in session. On November 2, Storm stated that with SWA closing, he will be making his return to WWE as a producer.

From 2001-2004, Storm competed in WWE, following the close of WCW. Storm chose to retire from in-ring action in 2004, but returned for two more matches in 2005, defeating Maven on Sunday Night Heat, and fellow ECW alum Chris Jericho on the One Night Stand pay-per-view. Storm did return to in-ring action following this retirement, making a few appearances for Ring of Honor and House of Hardcore, as well as numerous independent promotions from 2006 until 2016.

During his time in WWE, Storm became Intercontinental Champion after defeating Albert on the July 23, 2001 episode of Raw. He only retained the title for a month, however, before losing it to Edge. He also racked up four WWE Tag Team Championship reigns — two with William Regal, and one with both Christian and Chief Morley (aka Val Venis). 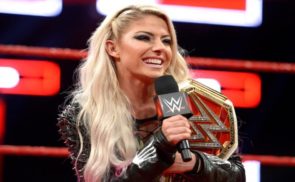