Yesterday, there was an announcement in an SEC filing that Vince McMahon sold almost two and a quarter million shares in WWE stock. Those shares are worth between 38-39 million dollars.

The reasoning for selling the shares is reportedly for “estate planning purposes for the benefit of Mr. McMahon and certain members of Mr. McMahon’s family.”

You can read the full SEC filing below:

“On May 16, 2016, the Vincent K. McMahon 2013 Irrev. Trust U/A dtd. December 5, 2013 (the “GRAT”) sold 2,191,894 shares of Class A common stock of World Wrestling Entertainment, Inc. (the “Company”) in a block trade made in accordance with the provisions of Rule 144 of the Securities Act of 1933, as amended. The GRAT was established by Vincent K. McMahon (“Mr. McMahon”), the Company’s Chairman and Chief Executive Officer, for estate planning purposes for the benefit of Mr. McMahon and certain members of Mr. McMahon’s family. The GRAT sale was executed for liquidity and asset diversification. After the sale, the GRAT continues to own 1,547,372 shares of the Company’s Class B common stock. The GRAT may, at any time, subject to compliance with applicable securities laws, dispose of some or all of its remaining shares of the Company’s common stock depending on various factors, including, but not limited to, the price of the shares of the Company’s Class A common stock, the terms and conditions of the transaction and prevailing market conditions, as well as liquidity, family planning and diversification objectives. Other than possible additional sales by the GRAT, Mr. McMahon informed the Company that he has no current plans to sell any shares of the Company’s stock and that he intends to continue in his capacity as the Company’s Chairman and Chief Executive Officer for the foreseeable future.

Do you think Vince McMahon is beginning to sell his stake in the company? 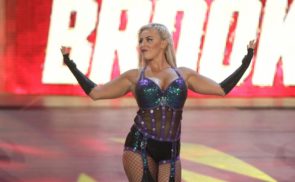 Opinion: How Will Dana Brooke Do On The Main Roster?