John Cena has been deadlocked in a feud with AJ Styles and The Club ever since returning to WWE programming at the end of May.

The rivalry between Cena & Styles is likely to continue through at least “Summerslam.” No matter how great Cena still is at his age, he’s starting to take precautions to prolong his wrestling career as long as possible.

According to a report from CageSideSeats.com, Cena is cutting back on house show appearances, and WWE live events. His schedule is becoming much more limited than it has been throughout his career.

That doesn’t mean you can’t see John Cena during WWE live events, but he won’t be touring full-time with WWE any longer, and it’ll become a more rare occurrence.

John Cena’s wrestling career has a lot of miles on it, and his success outside of WWE proves that wrestling is a passion, but not a necessity for him or his career.

It is also important to note that Cena returned roughly three or four months early from his shoulder surgery, so the last thing WWE needs to do is overwork him. That can also explain Cena teaming with Big Cass and Enzo at “Battleground” against The Club.

Do you think it is a good idea for Cena to wrestle part-time? 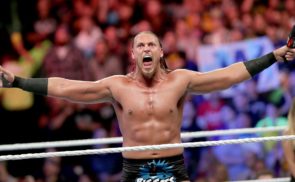