Thirsty? If there is one thing that WWE knows how to do rather well, it is sell merchandise. There are all kinds of things that WWE has had available for sale over the years and some of them are a little stranger than others. That does not mean they are bad ideas, but some of them can be a little bit strange. The company has something new on the market though and it might be up there on the list of strange ideas.

WWE is a company that is heavily built on legends. There are some very famous wrestlers who have appeared for WWE over the years and several of them are huge names who are going to be known both to wrestling fans and non-wrestling fans alike. It would make sense to capitalize on some of the bigger names and that is what WWE is doing in a rather weird way.

WWE has announced a line of wines in partnership with Wines That Rock. The first pair of wines in the collection, based on the Undertaker and the Ultimate Warrior, will be released on October 22. Each wine is a limited edition and two bottle cost $100, plus approximately $20 shipping. There is no word on if WWE will be producing any other wines in this line in the future.

This is a weird pairing. Check out the individual wrestlers:

Opinion: Sure why not. There are all kinds of WWE products out there so why not a collectible bottle of wine? It isn’t exactly the most common idea and maybe there are wrestling fans out there who are going to be interested. In other words, if there are enough fans out there willing to buy it, maybe WWE can make a nice profit off of the thing. It isn’t like they haven’t had weird ideas before.

What do you think of the idea? Who else should have a wine made after them? Let us know in the comments below. 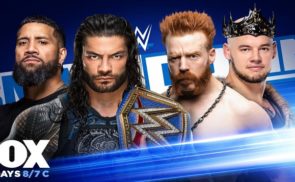 Vince McMahon Has His Eye On Someone New