They had a shot. There are so many wrestlers in WWE and some of them have quite a bit of talent. They can do things in the ring that are hard to believe but somehow make it work anyway. However, some of them need someone to do their talking for them as it is not their forte. WWE understood this with a certain current star and had some ideas for him, but only one of them wound up working.

Earlier this week, WWE released several names from NXT, including Malcolm Bivens. According to Fightful Select, WWE had discussed bringing Bivens to the main roster as Omos’ manager, though MVP wound up in the role. Another name considered for the spot was LA Knight, who has been working as a manager in dark segments before SmackDown. Bivens was released after making it clear that he would not be signing a new deal with WWE.

Opinion: That is something that could have gone very well had WWE put the whole thing together, though I get why it might not have worked. At the end of the day, if Bivens did not want to sign long term, there was no reason to push him in any kind of a role. If MVP is going to be sticking around, it makes sense to give him the spot, even if Bivens could have done so well with it.

What do you think of the idea of Bivens managing Omos? What is next for Bivens? Let us know in the comments below. 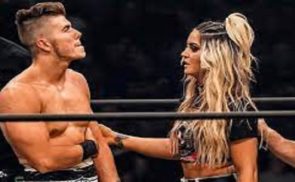 It’s A Good Weekend: AEW Team Picks Up Some Gold (With Some Chicanery)