We’ve got a new show this week and this time it is based around a new year. I’m not sure how interesting that is for a full pay per view, but WWE has set things up around flimsier premises before. The good thing is the card looks pretty solid and we could be in for a nice event. That is assuming the Coronavirus pandemic doesn’t wreck anything at the last minute. Let’s get to it.

This was added earlier in the week and it sounds good on paper. If nothing else, it is nice to see Ricochet and Cesaro getting some kind of a spot, as they so often feel like people just there to fill in time on television when no one else is available. Sheamus and Holland could make for a nice mentor/mentee twist on the Bar, which seems to be the focal point of how we got here in the first place.

The tag version of this: 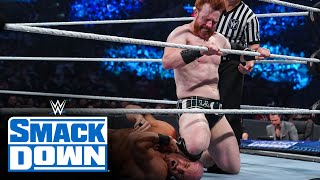 As for the match, I can’t imagine Sheamus and Holland losing when they seem to be a bit of a project for the future. It doesn’t help that Ricochet and Cesaro are the definition of jobbers to the stars at this point and I can’t imagine that is going to change in the span of a Kickoff Show match. That’s more than a bit depressing, but both of their ships seem to have sailed a long time ago.

Edge vs. The Miz

Let’s get one of the bigger ones out of the way first as we have what could have been a much more interesting match that just never made it to that next level. These two had some outstanding promo battles but after that it turned into a much more standard WWE build towards a big match. It still feels like a pretty good showdown, but there is something missing from the whole thing.

This got a lot more serious: 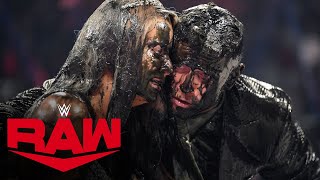 I’ll go with Miz winning due to some Maryse interference, which brings us to the missing thing: Beth Phoenix, who seems rather likely to come back and make this a mixed tag, maybe even at Wrestlemania. I don’t know if it’s interesting enough to go that far, but it’s hard to imagine that we don’t get the tag match at some point. You have a pretty hard time getting there with Edge winning, so Miz takes the first match.

Yes, we’re at it again, as these teams seem destined to feud forever. The good thing is you can more or less guarantee a near classic with this one so it isn’t like it’s a bad idea. I’m sure the match will be very good, but it is a little hard to get excited when it seemed they were building to King Woods vs. Roman Reigns for the Universal Title and instead we’re getting a match that has been done nearly to death.

We’ve been here a few times before: 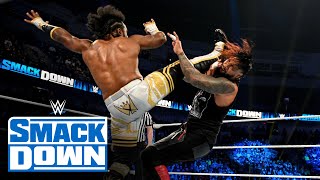 The more I think about it, the more I could see New Day winning here so we’ll go with that. It’s not like they need another title reign, but the Usos have held the things for a long, long time now and it might be smart to shake things up a bit. Throw in Paul Heyman being fired by Reigns and the team might be a little shaky by comparison. Either way, this should be a near classic, as these four tend to have.

I’m not sure how, but this feels like a heck of a showdown between two teams that are quite the big deals. RKBro has held the titles for about four months while the Profits are one of the better teams going today. That should make for a showdown and they worked well together in their previous match. That’s a nice feeling to have for a Tag Team Title match for a change, as it doesn’t happen on the red side very often.

They’ve done this one before too: 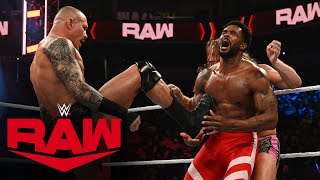 I’ll take RKBro to retain, but they’re getting into a weird spot with their title reign. They are all but out of teams to give them a run for their money (save for the Profits here) and I don’t know who takes the titles from them if they make it out of this one. There aren’t many other options so while there is a chance they do a switch here, I think there is enough left in RKBro to validate them holding the titles.

Here’s the easiest match on the show, as you have a former multiple time World Champion against a literal comedy guy. Somehow this match is taking place over a sword that was stabbed into a desk, which has to be up there for the weirdest/weakest reasons to have a pay per view match. I think we all know what to expect here and in this case, that is not a bad thing.

One of the weird ways to set it up: 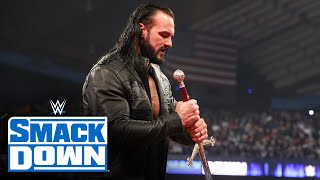 McIntyre wins here, in what should be dominant fashion, as even Happy Corbin’s interference isn’t enough to keep Moss around. It would not be out of the question to see McIntyre challenging for the Universal Title at Wrestlemania and there is no sense at all in having him lose what feels like a squash. Then again, it makes little sense to have him in this match in the first place, but at least he should win it pretty easily.

They are in a pretty awkward spot here as Lashley is looking like the star of stars on Monday Night Raw at the moment but Big E. has already gone over him twice. It also doesn’t help that Lashley was such a dominant champion and had cleared out the main event scene, so it isn’t like they have many other options for him should he get the title back. That leaves Rollins and Owens as the underdogs, which could open some doors for them.

This, without the tags: 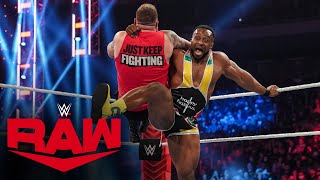 I’ll still go with Big E. though, as Rollins doesn’t seem likely to get the title back and Owens is probably there to take the pin. Big E. has been badly overshadowed by Lashley in recent weeks and I’m not sure how much longer he is going to keep the title. It seems like Lashley’s to win, unless they find something else for him to do in a hurry. Big E. retains for now though, even if it is just keeping it on him for a short while.

Man alive I wanted to get into this match but, as usual, WWE has managed to take away almost everything that made Morgan interesting in the first place. The fans got behind Morgan because she was an underdog who probably shouldn’t be here but kept fighting anyway. Now she is being presented like a main event star and it has taken me pretty far out of the whole thing.

When Morgan got serious: 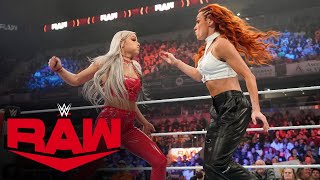 As much as I would love to see Morgan win the title, I can’t imagine they pull the trigger on anything that doesn’t involve one of the already established big stars. That has plagued WWE for a long time now, even if Morgan taking the title could be a heck of a feel good moment. Lynch is likely to retain here, probably in a more definitive manner than before, and then WWE will wonder why the division is falling apart right in front of them.

Oh boy I’m not sure where to go with this one and that makes for a pretty fascinating main event. The Paul Heyman factor changes everything, and now the question is not so much when Heyman returns but rather does he do it here. That would be a heck of a fast turnaround for him to be back though and I don’t think it happens so soon. That gives us a problem though, and unfortunately I think I know where it’s going. 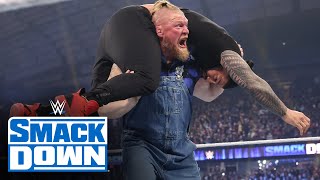 I think they actually do the title change here, as Reigns isn’t good enough to beat Lesnar without Heyman in his corner. That is going to open up a long list of issues, but for now I think Lesnar takes the title, likely setting up some big showdown at Wrestlemania for when they really want to do something new. These two are forever joined at the hip, and this time I think it’s Lesnar taking the title again.

Overall, I’m liking what we’re seeing with this show and it could be a good one. Now that being said, this is WWE and there is always the chance that they are going to screw something up. I’m not sure how big of a show this is going to be going forward, but the first edition is a stacked card that could be quite good if it lives up to its rather high potential. 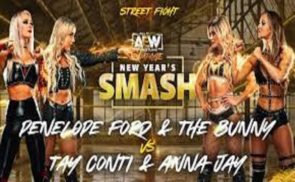 VIDEO: We Might Have The First Royal Rumble Entrant (And It’s A Surprise)