WWE Clash At The Castle Preview, Predictions And Thoughts

This is one of those special shows as WWE will be holding their first stadium event in the United Kingdom in over thirty years. You would think this would mean a huge card but while the main event is a big deal, there are only six matches on the card. A bonus match would not surprise me but WWE is not exactly known for some very last second changes. Let’s get to it.

We’re not starting with a good one here as this feels like either character rehabilitation for Morgan or the end of a short and unsuccessful reign as champion. Morgan has been more or less a disaster since her cheat code title win and subsequent tap out in the next match. The charm is long gone and WWE continues to think that her just holding a belt is enough to make her a big deal.

I’ll take Morgan to retain here, just so she can have a clean win. That being said, how in the world has Baszler never won a singles title in WWE? I know she was stuck with Nia Jax for the better part of ever, but you would think there would be at least a token win in there somewhere. I would love to see it happen here, but unless WWE has completely given up on Morgan, that isn’t going to be the case.

Now this is one of those stories where you can see where things are going and that isn’t a bad thing. WWE has all but hit you over the head with the fact that Dominick Mysterio is turning on Rey here and since that has been teased since LAST YEAR’S Summerslam, I would call it well overdue. Whether it is because he enjoys being beaten up by Rhea Ripley isn’t clear, but the turn is going to happen.

Naturally Judgment Day takes this and hopefully they’re done with the Mysterios for now. I don’t think I can see Dominick joining the team and that’s probably a good thing, but ultimately they need to move on and fight someone other than Edge/Rey/Dominick. They could also use a win as a team and that is where this probably comes in, which should at least be a good match despite the lack of shock over the turn.

Yes Matt, as he got his first name back this week. This is a feud that has been going on for a few months now but they haven’t actually had a match yet. The good thing is that they have made it more personal this week on Monday Night Raw with Rollins’ lines about Riddle’s divorce. That should make things that much better, and now we get to see how the violence goes down.

As much as it seems like Rollins is probably going to win here, I’ll take Riddle to give him a victory and some personal revenge. That is a smart way to go as Rollins has been a made man for years and Riddle could still use a few more wins under his belt. If nothing else, just having the full name back makes him a bit more serious of a star and that is a nice thing to see after so long.

Can we officially name the heels yet? The Control thing has been thrown around multiple times but it has never been used by anyone on TV. Anyway, this is a match that the villains need to win after Raquel Rodriguez and Aliyah won the Women’s Tag Team Titles on Monday for whatever reason. The good thing is it seems WWE believes in these three so there is some hope to be had.

I’ll take Bayley and company to win, likely with Bayley pinning Belair to set up the next title match. Asuka and Bliss are still a team (I guess?) because we need to have a division to fight for the titles, meaning they can be set up against Kai and Sky down the line. For now though, this is Bayley’s chance to get a big win now that she is back in the ring and pinning Belair would certainly qualify.

Of all the matches on the show, this one feels like the most fun. They aren’t trying to hide what they have here, as this is going to be nothing but two big strong men beating the tar out of each other. Gunther wants to face elite competition and Sheamus wants to win the one title he needs to complete the Ultimate Grand Slam. This isn’t complicated and it doesn’t need to be.

I’ll go with Gunther to retain in his hardest match to date. As someone who needs one title to complete the collection in WWE, I would think it’s safe to say that Sheamus doesn’t need the win. While I could see them giving him the win for the sake of history, I don’t think they want Gunther losing so soon so he should hold onto the title here. He’ll be rather banged up, but he’ll still be champion.

I believe you would call this shaky ground for WWE, because one thing has become clear in the last few weeks: McIntyre has to win this. The last time I felt like a star needed to win a title this badly was James Storm at Lockdown 2012 and that went very badly for both Storm and TNA when he didn’t. There is no reason to not pull the trigger here, even if it is for just one title (through some shenanigans) or even if he loses it soon thereafter (either to Austin Theory, Karrion Kross (stop laughing) or Reigns again). McIntyre could lose all four limbs and still needs to win this and that brings us to the problem.

Therefore, I’ll go with the logical step and say McIntyre wins the title, or at least part of it, here. Maybe something happens after, but WWE has put too much into the build of the once in thirty years deal and McIntyre in general to have him be the next name on Reigns’ list. WWE needs to be smart here and go with the corner they have booked themselves into and I’ll give them the benefit of the doubt by saying McIntyre wins.

The more I think about this card, the bigger it feels, though it wouldn’t surprise me to see one more match added in to boost things up a bit. The show being a six match card doesn’t really sound impressive but having the World Title change hands over there would make up for some of the problem. Either way, we should be in for a good show as we see the first event with time to be built off the new regime. I’m interested, and that’s a nice thing to be able to say. 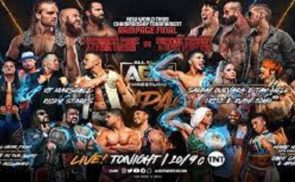 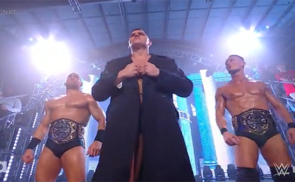 Nice To See You: NXT Call Up Leads To Reunion At WWE Clash At The Castle