We’re finally finishing up the two week long Fyter Fest and hopefully there is a bit less shark enthusiasm this time around. We’ll be seeing some good stuff this week, including Christopher Daniels vs. Jay Lethal as we are only a day away from Ring Of Honor’s Death Before Dishonor. Let’s get to it.

Hangman Page/John Silver vs. Butcher and the Blade

Silver charges at both of them to start before Page can even get his vest off. That means Silver gets beaten down in the corner as the numbers game gets the better of it. Butcher, who looks to have slimmed down a bit, chops away and it’s off to Blade for the stomping. A suplex gets Silver out of trouble and it’s back to Page to clean house. The fall away slam sends Blade flying and a slingshot dive takes Butcher out. A top rope clothesline gets two on Blade but Butcher pulls Page to the floor for some whips into the barricade.

We take a break and come back with Silver getting the hot tag and coming in to drop Blade with a running elbow. Butcher comes in and tries some double teaming but Silver hands it back to Page to beat both of them down. Page and Butcher trade clotheslines until Page hits a discus lariat to drop him. Everything breaks down and the lights go blue for no apparent reason. Silver gets in a shot on Butcher and it’s the Buckshot Lariat to give Page the pin at 8:07.

Result: Hangman Page/John Silver b. Butcher and the Blade (8:07)

Video on Daniel Garcia vs. Wheeler Yuta, with a focus on Garcia’s car crash from a few years ago that almost killed him.

Here is Claudio Castagnoli for a chat. He’s ready for his shot at the Ring Of Honor World Title at Death Before Dishonor, because the World Title is the one thing that he has chased for his entire career. Castagnoli doesn’t believe he is the best because he has a bunch of titles. He believe it because the fans cheer for him every time, but now he wants some gold to go with it. The only way to continue this great start is to take the title from Jonathan Gresham on Saturday. Mic drop. Castagnoli doesn’t talk much but he got the point across here.

Matt Sydal is here with Moriarty. They trade arm control to start as JR says this is the kind of wrestling he loves. An exchange of flips and dives results in Moriarty being sent to the floor and we take a break. Back with Moriarty crashing off the top as Stokely Hathaway comes out to watch.

A high crossbody gives Martin two and he uses the bottom rope to springboard flip over a charging Moriarty. That’s fine with Moriarty who pulls Martin into the Border City Stretch but Martin is over to the rope. Martin is back up with a suplex for two and Hathaway is rather pleased. The Nose Dive misses so Martin grabs an O’Connor roll, only to have Moriarty roll him over and use the rope for the pin at 8:40.

Baker takes Blue down to start and cranks on the arm a bit. Blue fights up and tries to fight back only to get kicked down while trying a Matrix. A kick to the head allows the tag off to Ashley, who gets decked by Hayter. Baker grabs a butterfly suplex so Hayter can drop Ashley again, setting up Lockjaw for the tap at 4:13.

It’s time for a rap battle between Austin Gunn and Max Caster, with the rest of their associated friends/family here too. A hip hop artist named Lil Scrappy is the judge and Gunn goes first. Austin brings up Caster playing one of Bobby Lashley’s sisters and possibly not being able to please Kris Statlander when they were dating. Then we get a reference to Caster’s dad’s NFL career mixed with a Bowens gay joke, which has Scrappy laughing.

Caster gets to go and mocks Austin’s rap abilities. Austin goes again, and says Cena wants his gimmick back. Caster says he’s been a star since Billy was called the One. That sends him onto a roll of jokes about gun control, Pokemon and bad reality shows. Austin has no comeback and Caster is named the winner, triggering the brawl. The Acclaimed gets beaten down, partially due to a trashcan.

Sonjay Dutt and Satnam Singh are in Lethal’s corner. Daniels chops away to start until Lethal gets in an enziguri. Back up and Daniels runs him over for a fast two as commentary finally brings up that Samoa Joe is out of action due to being attacked a few weeks ago. That hasn’t been mentioned much and it hasn’t exactly made Joe look great to just have him missing for reasons not very often mentioned. Daniels gets knocked to the floor for a dive from Lethal and we take a break.

Back with Lethal hitting a basement superkick, only to have Daniels knee him in the face. There’s an STO to drop Lethal again, followed by the Blue Thunder Bomb for two. The Lethal Combination gets two but the Figure Four attempt is blocked. Daniels is cut off by a big boot to the face and the Lethal Injection finishes for Lethal at 8:26.

Post match Daniels gets beaten down, including a Koquina Clutch on the floor. 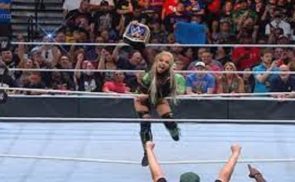 There’s A Reason For That: Here’s Why WWE Gave Liv Morgan Her Huge Push