VIDEO: Roman Reigns Teases “New Phase” In Life, Not Sure When Crowd Will See Him Again

That sounds game changerish. There are very few people who have reached the point of becoming the face of the WWE. Those names are among the biggest stars the company has ever seen and one of them is not always around. It is a big deal when one of them steps away, and now we might be seeing the current one shift away, at least based on what he had to say this weekend.

WWE ran a live event over the weekend in Trenton, New Jersey with Roman Reigns in the main event. Following the match, Reigns took the microphone to thank the fans for coming out, as he does at most live events. During his speech, Reigns said that he was moving into a new phase in his life and did not know if he would be back here again. There is no word on what that means or if this is part of a storyline.

This could mean a few things. Check out what Reigns had to say (it is a big hard to hear):

Opinion: I’m not sure what that means but the idea of Reigns leaving WWE or even stepping into more of a part time role is one of those things that should rattle WWE to its core. Reigns has been the focal point of the company for the better part of two years now and is a proven ratings draw on SmackDown. The problem with making him that big of a focus is that he has to go away at some point, but who is there to take up the spot? Right now I don’t know who that is and it seems it might be time to figure it out in a hurry.

What do you think of Reigns’ announcement? Who should or could take his place? Let us know in the comments below. 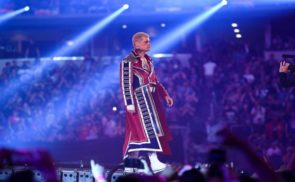