That’s rather nice. There are all kinds of people involved in making a WWE show work and a lot of the have nothing to do with the wrestling itself. WWE television is one of the most impressive presentations in the world and they pull it off every single week. Between the graphics, music and overall production value, WWE is rarely touched. Now one of WWE’s bigger stars is giving them a nice thank you.

Every now and then you get a wrestler who feels different from almost anyone else in WWE. That is the case today, as Kevin Owens certainly fits the description. Owens does not look or talk like anyone else in the company and that allows him to do some other things. One of the best things about him is that he comes off as genuine on occasion, which is what happened in a rather nice way.

This is pretty cool. Check out Owens’ rather nice tribute:

Owens has tweeted out a video talking about some thoughts he had while in the Elimination Chamber. While he was waiting to enter the match, Owens began thinking about how impressive of a setup both the match and the Thunderdome both are. Owens thanked the people backstage who work to put everything together and do not receive enough credit. He thanks everyone from the people who put the ring together to the camera crew to catering and all points in between.

Opinion: The video made me smile because you never see something like this. I’m sure there are a lot of people in WWE who feel exactly the same way but it’s great to see someone take the time out of their day to say something like this. Owens is a class act for releasing this video and it was a rather touching moment. WWE’s presentation is the best in the world and all of the people who put it together deserve some credit like this. 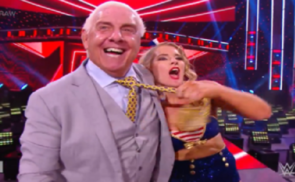