One more time. We are less than two weeks away from Takeover: In Your House but there are a few more shows to get through before we make it there. With the battle between NXT and Dynamite building up, it is time for NXT to build things up as well as they can to fight them off. One of the best ways is with a stacked card, which is what NXT is setting up next week.

Over the last month, Drake Maverick’s extended exit from WWE has been one of the better stories taking place in the company. Maverick was announced as one of the names being released from WWE on April 15 and soon after the announcement, Maverick sent out an emotional response, talking about how much WWE meant to him. Before he was gone though, Maverick would be participating in the Interim Cruiserweight Title Tournament, and that leads us to next week.

This week on NXT, Maverick defeated Kushida and Jake Atlas in a triple threat match to reach the finals of the tournament on next week’s NXT. Maverick will face Hijo de Fantasma, who had already qualified for the match. Should Maverick lose, it will be his last match with the company. Should Maverick win, he has already promised Kushida the first shot at the title.

It has been a wild ride. Check out how we got here:

Opinion: I know this might not be the most well received story as there are going to be some people uncomfortable with an angle based around employment given the current situation. That’s not something I’m going to argue against but dang I’ve had a great time watching Maverick survive week after week. Hopefully it keeps going, but if next week is it for him, that’s not a bad run to end on.

What have you thought of the story? Who wins at Takeover? Let us know in the comments below. 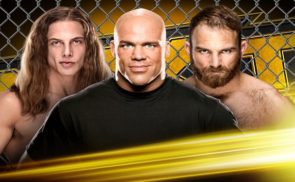