So much for that. With so many wrestlers on the WWE roster, it makes a lot of sense to pair some of them up. That has worked out well in a lot of situations, as some of the teams and pairings have been quite the successes. Some of them are among the best things going in WWE today, but they all have to end at some point. That was the case again this week in a surprise twist.

Two different pairings split up this week on Monday Night Raw. First, the returning MVP turned on Bobby Lashley to side with Omos. Lashley and Omos were having a staredown when MVP attacked Lashley, allowing Omos to beat Lashley down and side with MVP. Later, Carmella and Queen Zelina get in an argument before their scheduled tag match, with Zelina attacking Carmella and leaving to officially end their team as well.

Opinion: The Carmella/Zelina split has been building for some time, but the MVP/Lashley split seemed to come out of nowhere. I’m not sure why they needed to be split, though Lashley has basically become a good guy now and that means he does not need a manager. Lashley vs. Omos with MVP in the giant’s corner could be interesting, but I don’t know how long the feud can last.

What did you think of the splits? What is next for everyone involved? Let us know in the comments below. 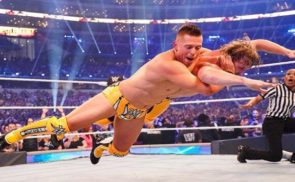 Backstage News On The Reason For A Strange WrestleMania Surprise