Stratus has been on TV before. The Women’s Revolution has changed the way wrestling is presented in a great way. Women’s wrestling has gone from little more than filler material centered around women’s looks to something that actually matters, with the wrestlers getting to show what they can do and even be on equal footing with men. One of the pioneers who paved the way for this generation is getting to do something cool again.

When you hear modern female wrestlers talking about the people who influenced them growing up, one of the names who keeps coming up is Trish Stratus. She was one of the most successful women’s wrestlers of all time and for a good many years was one of the gold standards for American women’s wrestling. That is a pretty lofty goal to reach and now she is going to be able to add something else to her non-wrestling resume.

Stratus has announced that she will be appearing in the movie Christmas In The Rockies, which debuts on the FOX Nation streaming service on Thursday November 26. She will be playing a lumberjack champion named Marie Brown in a cameo role. Stratus has said that this is a bucket list item for her as she has always wanted to be in a Christmas movie. This is Stratus’ third appearance in a movie and her first since 2015.

Add it to her resume. Check out some of Stratus’ more famous work:

What is your favorite Stratus moment? Will she ever wrestle again? Let us know in the comments below. 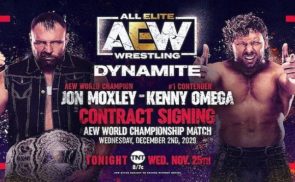 Impact Wrestling Champion To Miss Time Due To Injury