We are nine days away from Survivor Series and it would be nice if they talked about the show a little bit more. The show has been acknowledged more than once, but the champion vs. champion matches have gotten almost no attention whatsoever. I’d love to see the show built up some more, but we have too many other things to get to first. Let’s get to it.

Here is Sonya Deville, with the Smackdown women’s Survivor Series team: Shotzi/Natalya/Shayna Baszler/Aliyah, but they need a fifth. That would be the captain of the team: Sasha Banks. Shotzi isn’t happy with this though and is ready to fight Banks, but here is Naomi to come out and get in Sonya’s face. Naomi hits Baszler and the fight is on.

Banks bulldogs Natalya down to start so it’s off to Baszler in a hurry. That earns her some running knees from Banks and it’s off to Aliyah, who gets taken into the corner for some alternating stomps. Aliyah gets a small package but has to fight out of a Kirifuda Clutch attempt. The tag brings in Naomi to clean house but Natalya gets in a tag of her own, allowing Baszler to knock Naomi outside.

There’s a suplex to drop Naomi hard on the floor and Natalya does it again for good measure. Naomi gets sent hard into the barricade and we take a break. Back with Naomi caught in Shotzi’s front facelock before Baszler comes back in to work on the arm. Naomi fights out of the corner, including a kick to the face to put Baszler on the floor. Natalya breaks up the tag again though, only to get rolled up.

The kickout sends her into Aliyah for the hot tag, meaning a high crossbody can get two on Natalya. Some Thesz presses and a neckbreaker get two on Natalya as everything breaks down. Banks hits the Meteora off the apron to drop Baszler and Naomi superkicks Shotzi. Back in and Natalya get the Sharpshooter on Aliyah, only to have Naomi shove it over to give Aliyah the pin at 12:48.

Sami Zayn is practicing his leadership speech in front of a mirror but Jeff Hardy interrupts. Zayn asked what Hardy thinks, and Jeff says it sucked.

Aliyah is rather excited over her win but Sonya Deville comes in. Sonya asks how long Aliyah has known Naomi and then pulls her off of the team. No replacement is named and Aliyah is crushed.

We look back at Roman Reigns and the Bloodline attacking New Day last week, which has left Kofi Kingston on the injured list.

Kayla Braxton comes up to Roman Reigns and Paul Heyman. Reigns thinks it’s either to acknowledge him or to flirt with the wise man. That makes Reigns laugh, so he tells Heyman to smarten her up. Heyman says that is going to be a hard task but promises that Reigns will make Xavier Woods acknowledge him tonight. If that doesn’t happen, Reigns will take a knee. If Reigns breaks that promise, you can strip him of the Universal Title and ban him from Smackdown.

We look back at Happy Corbin and Madcap Moss getting into it with the Viking Raiders.

Moss has a new joke about Viking Raiders, which suggests that Erik is fat.

Boogs busts out some air drums to start and gutwrenches Humberto up for a spinning suplex. Angel gets in a cheap dropkick though and some running knees in the corner give Humberto too. Angel’s dropkick to the side of the head connects but Boogs muscles him up for a face first drop onto the buckle gets him a breather. The hot tag brings in Nakamura to clean house as everything breaks down. Angel posts Boogs and pulls Humberto out of the way of Kinshasa. Humberto uses an Angel distraction to kick Nakamura, setting up a springboard High/Low for the pin at 4:52.

NXT’s Von Wagner is in Adam Pearce and Sonya Deville’s office when Sami Zayn comes in. Zayn wants Jeff Hardy off of the Survivor Series team, so Pearce makes Sami vs. Hardy, with the loser off the team.

Video on the Wrestlemania tickets on sale party at AT&T Stadium.

Here is Charlotte for a chat. Charlotte says it’s nice to see everyone before moving on to talking about her Survivor Series opponent, Becky Lynch. She talks about all of Becky’s different monikers but they add up to making Becky a manufactured champion. Becky has had her great moments, like winning at Wrestlemania XXXV (with Charlotte’s help) and beating Bianca Belair in 26 seconds. At Survivor Series, her new name is going to be Becky Uh Oh, because Charlotte is going to beat her.

Before Charlotte can move on, here is Toni Storm (hokey smoke I had forgotten she actually works here anymore) to interrupt. Toni wants to know about anyone getting an opportunity, so why not Charlotte vs. Toni for the title tonight? That’s a no and Charlotte leaves as Toni glares a lot.

Xavier Woods talks about what a rough week it has been for New Day but promises to make Roman Reigns bend the knee tonight.

Aliyah is on the phone to complain about being thrown off the team when Mustafa Ali comes in. Ali says he knew this would happen but Ricochet comes in to say Aliyah did well and to keep her head up. Aliyah leaves with him and seems to feel better.

Sami goes after the arm to start but Hardy is back with a hiptoss, much to the pro-Hardy’s crowd’s delight. Hardy sends him face first into the buckle but Sami is back with right hands to take over. They head outside with Jeff sending Sami into the barricade but missing Poetry In Motion. We take a break and come back with Sami grabbing a chinlock. Hardy fights up and hits the basement dropkick for two, with the kickout being quite the surprise. Whisper in the Wind gets two more and there’s the Twist of Fate. The Swanton finishes Sami at 9:13.

Hit Row raps about how awesome they are.

Jinder Mahal and Shanky rap about their own greatness. Eminem and Vanilla Ice references are made. Shanky also has to drop a beat for Mahal, setting up a rap about Hit Row.

Ridge Holland still thinks Sheamus is rather neat. Cesaro comes in to say he knows Sheamus well, because they didn’t just set the bar, but they were the Bar. Holland says he and Sheamus will be a much more successful team when Sheamus is back next week.

The loser takes a knee/acknowledges the other. Paul Heyman is here with Reigns but Woods is on his own. Reigns goes right after Reigns to start but gets knocked to the floor for a surprise. A dropkick through the ropes rocks Reigns again until he drops Woods onto the announcers’ table.

We take a break and come back with Reigns hitting the rapid fire clotheslines in the corner. Woods gets in a shot of his own for a breather and a side kick to the face gets two. Reigns plants Woods coming off the ropes but the spear is cut off with a superkick. The Limit Break gets two…as the Usos pull Woods out for the DQ at 10:48.

Result: King Woods b. Roman Reigns via DQ when the Usos interfered (10:48)

Post match the big beatdown is on and the Usos put the crown on Reigns’ head to end the show. 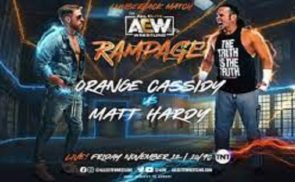