We are eight days away from Money In The Bank and the ladder matches need to be filled in. This includes a women’s qualifying match tonight, but odds are some of the focus is going to be on what Roman Reigns vs. Brock Lesnar. You know, because we need to build towards Summerslam before Money In The Bank. Let’s get to it.

We open with a long recap of Roman Reigns retaining the World Title over Riddle last week. After the match, Brock Lesnar returned and took Reigns out, setting up their Summerslam rematch.

Here is Drew McIntyre to get things going. He’s looking forward to Money In The Bank but he’s looking even more forward to Summerslam, because he is going to cash in on whoever wins between Roman Reigns and Brock Lesnar. Cue the Brawling Brutes to interrupt, with Sheamus saying Drew is off his bleeding rocker if he thinks he is going to be the one to cash in at Summerslam. Sheamus mocks Drew for having someone cash in on him, which Sheamus did to Reigns before.

Cue Paul Heyman to interrupt, complete with an annoyed looking Adam Pearce behind him. Heyman laughs at the idea of cashing in on Brock Lesnar because Reigns is retaining his title. However, even Heyman knows that Reigns might be in danger of a cash in after the Last Man Standing match because Reigns could be a bit vulnerable after such a match. That’s why Pearce has a special announcement: after some strenuous negotiations, neither Sheamus nor McIntyre will be in the Money In The Bank ladder match, because neither of them won. Therefore, they do have a way in though: teaming together to beat the Usos tonight.

Sami Zayn is very happy with what just happened and is ready to get rid of Drew McIntyre and Sheamus. Then he can win the briefcase and….protect Reigns.

Nakamura kicks away to start and hits a sliding German suplex to drop Zayn again. There’s the running kick to the face for two but Sami knocks him outside for a not very near countout. Back in and they come crashing off the top as we take a break. We come back with Nakamura catching him on the middle rope and pulling him down. Zayn is fine enough to grab a Michinoku Driver for two more but he misses something off the top.

The middle rope knee to the back of the neck gives Nakamura two but the threat of Kinshasa sends Zayn outside. Kinshasa connects outside with Zayn having to beat the count back inside. That means Kinshasa can be set up back inside but Zayn catches him with a quick Helluva Kick for the pin at 9:49.

Here are New Day and Jinder Mahal/Shanky for a dance contest. Why you ask? According to New Day, because no one wants to see this match again and new Day doesn’t do rematches. I’ll let you laugh at that as Shanky dances to Woods’ trombone music and then shoves Mahal away for not liking the dancing. Cue the Viking Raiders’ graphics on screen and then charge in from behind for the big beatdown.

Sonya Deville storms into Adam Pearce’s office and yells about not being used since she has been back on Smackdown. Raquel Rodriguez sure has been though, which is why Pearce puts Deville in a match with Rodriguez….and Lacey Evans. Next.

Shayna Baszler and Xia Li come to the ring with Sonya. Evans drop toeholds her down but Sonya is back with a shot to the knee. Another shot drops Evans so she gets over for the tag to Rodriguez. The Tejana Bomb connects to knock Sonya silly and it’s the Woman’s Right to give Evans the pin at 3:03.

Post match the beatdown is on but Evans and Rodriguez clean house.

The Street Profits walk through the back and run into Los Lotharios with a woman, Drew Gulak exercising and Madcap Moss standing there. Dawkins has a joke for him and it doesn’t quite work.

Here is Natalya, dressed as Ronda Rousey (complete with a lot of eye makeup) and pushing a baby stroller. Natalya talks about how she had Rousey THIS CLOSE to tapping out in the Sharpshooter so Rousey should just hand over the title now and get back to taking care of her baby.

Cue Rousey to say she didn’t recognize Natalya without her rack hanging out. Rousey says she didn’t mutilate her body to conform to some beauty standard and isn’t giving Natalya the title now. No one has cared about Natalya before because she has no charisma and brags so much about being a Hart. The closest Natalya has become to being a star in the main event is dressing like Rousey. The brawl is on with Natalya hitting her with the stroller to escape.

Sheamus and Drew McIntyre are ready for the Usos.

Gunther, with Ludvig Kaiser, is defending. A boot to the face drops Ricochet early and we hit the half crab. Make that an STF (with Cole calling it a Crossface and McAfee making an Attitude Adjustment reference). Ricochet makes the rope and flips out of a German suplex, setting up a jumping knee to the face. The clothesline sets up the chop to send Ricochet flying though and now the release German suplex connects. The shotgun dropkick sets up the powerbomb to retain the title at 3:05.

Sami Zayn reassures Paul Heyman that he would never cash in Money In The Bank on Roman Reigns. Maybe on Brock Lesnar….but Zayn realizes he shouldn’t have said that and leaves from a glaring Heyman.

Money In The Bank Qualifying Match: Tamina vs. Shotzi

Tamina throws her around to start, setting up a powerslam. Shotzi gets in a shot of her own though and an enziguri rocks Tamina again. A superkick out of the air gives Tamina two more with Shotzi getting her foot in the vicinity of the ropes. Shotzi manages a whip into the post and Never Wake Up (a leg trap DDT) finishes Tamina at 2:33.

We look back at the Viking Raiders’ return.

The Raiders are tired of being forgotten and are here to run through anyone who gets in their way.

Max Dupri’s new models aren’t here tonight because they didn’t get their dressing room demands. Adam Pearce says next week, which Dupri says means they can titillate the juices of the masses.

Pat McAfee stands on the announcers’ table to talk about how Happy Corbin threw a fit last week. We see Madcap Moss beating Corbin last week and McAfee laughing at Corbin as a result. McAfee talks about how much he loves his job and how alive he felt the first time he was in the Thunderdome. He loves talking to the millions (AND MILLIONS) so the challenge is thrown out for Summerslam.

Non-title and Sheamus and McIntyre have to win to stay in Money In The Bank. The Street Profits join commentary as Sheamus throws Jimmy down to start. Jimmy takes Sheamus into the corner though and it’s Jey coming in for a shot to the face. That doesn’t last long as Sheamus is back with the ten forearms to the chest. Hold on though as Drew goes outside to go after Butch. Sheamus goes outside and brawls with Drew, allowing the Usos to take them down as we take a break.

Back with Sheamus punching his way out of trouble but Jimmy comes in with a superkick. The running hip attack in the corner is cut off with a knee to the face though and the hot tag brings in McIntyre to clean house. Some superkicks drop Drew though and the Superfly Splash gets two with Sheamus making the save. Everything breaks down and Ridge Holland has to hold Butch back. Cue Sami Zayn to go after Drew but Dawkins cuts him off. The Profits and the Uso argue until Drew flip dives onto all four of them. Back in and Jey manages a superkick before the Claymore finishes Jey at 11:12. 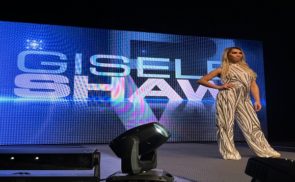