Now this could be interesting as we could get the post-Wrestlemania moments without as smarky of a crowd. A lot of people are going to get tired of how over the top things get on Raw and I’m not sure how strong that’s going to be here. The big name people are expecting tonight is Shinsuke Nakamura as there’s no reason for him not to show up here. Let’s get to it.

I was in the arena for this show, sitting in the upper deck with the hard camera on my left and the rigging above the ring blocking part of the Titantron. The dark match saw American Alpha defeat the Vaudevillains in about 4:00 with the Steiner Bulldog to English in Gotch’s final match with the promotion.

As you might expect, we open with a long recap of Wrestlemania.

Here’s Randy Orton to open things up. Do you remember when he said “If you can’t beat em, join em? And when the time is right, screw em?”. Well he forgot part of it: When you get in the ring with them, beat them up! Randy proved that he’s the master but here’s Bray on screen to say this has just begun. Sister Abigail promised him so many things so he wants a House of Horrors match. Orton doesn’t know what that is but he agrees.

The screen goes off and Bray appears in the ring for the brawl. Erick Rowan, in a new mask, comes out from underneath the ring and the announcers don’t recognize him despite the BIG RED BEARD. Luke Harper comes out for the save, likely setting up a tag match later tonight. 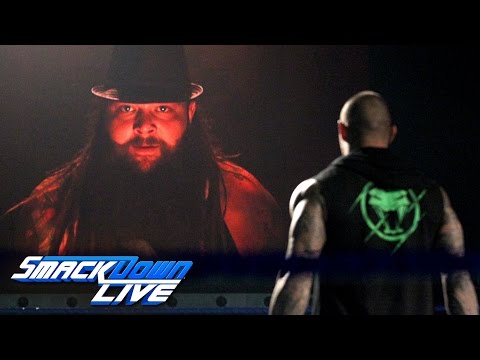 Miz and Maryse didn’t think much of the proposal on Sunday because it felt like good marketing. Tonight though, they’re calling out Cena and Nikki, possibly for the last time with the Superstar Shakeup looming.

Bliss is challenging and is even more serious than usual. JBL wants to know if Naomi can do it two nights in a row because he can’t count. Naomi sends her face first into the buckle and we head outside for a break. Back with Bliss in control due to Naomi tweaking her knee again. Bliss cranks on the leg and the fans can’t decide between DELETE, STUPID IDIOT or basic applause. Unfortunately they do have the “1-2-SWEET!” chant for near falls, which just sounds horrible.

Naomi comes back with a kick to the face for two, only to have Bliss grab a DDT for the same. The Rear View gets two but Naomi gets pulled off the ropes for a crash. Not that it matters as she grabs a sunset flip but switches over to the reverse Crossface to retain the title at 10:18.

Rating: C+. As usual, the wrestling doesn’t matter here but this was a fine story with Naomi having an injury and Bliss working it over as well as she could. Naomi even used her new finisher to retain the title in the one on one match. This was a nice little match and that’s all it needed to be. Odds are Bliss goes to Raw after this and there’s nothing wrong with that.

Here’s Curt Hawkins to ask why no one is talking about him. He wants some attention so let’s have an open challenge. I think you know what’s coming.

The fans had been BEGGING to explode for Tye all weekend as that TEN chant was going crazy for every show I took in. You can see the emotion on Dillinger’s face as he’s spent a LONG time trying to get here. Dillinger immediately snapmares him down and cartwheels into the TEN so we can get that out of the way. A series of strikes drops Hawkins and sets up the ten left hands in the corner. The Tyebreaker is good for the pin at 1:53. This was all it needed to be, though I have a bad feeling Tye is going to find out that his chant is more over than he is. 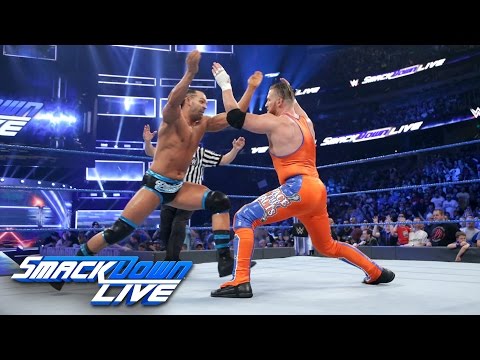 Mojo Rawley’s mind is blown by winning the Battle Royal and wishes he could have seen Andre on a dance floor. This is the biggest moment of his night and the bar has been raised. Now it’s time to throw some weight on it. I really hope this goes somewhere for him. This year at Axxess, I was waiting in line to get inside the Elimination Chamber when Rawley walked by during the session change. It took Rawley about six minutes to walk thirty feet as he stopped and talked to, shook hands with, high fived or took pictures with every single fan on the railing. You don’t see that often and it’s a classy move.

Here are Miz and Maryse to Cena’s full entrance, complete with Maryse doing Nikki’s dance. If you pay attention from a distance, you could tell it was Miz by the way he moved but at a glance, you really could be fooled by this. Doing the robotic Cena voice, Miz says rule #1 is you can’t say John Cena sucks. Maryse thanks “John” for being manipulated into doing whatever she wanted, including giving her this rock (the size of a small doorknob). They’re leaving WWE and going to Hollywood, where you won’t be able to see us.

They go to leave (a shame as that means no more Maryse as Nikki, which really works for her)…..and we’ve got a man playing a violin. You know what that means: SHINSUKE NAKAMURA makes his debut with the fans singing/humming/WHOAing/whatever it is you call making the sounds of his wordless music to the pop of the night.

We go to a break with Nakamura posing, during which Dolph Ziggler came out to challenge him for the dark match main event.

Non-title street fight. Corbin stomps him down in the corner and chokeshoves Dean down (Bliss actually does it better) before going outside for a chair. Dean baseball slides it into his face and knocks Corbin into the crowd as we take a break. Back with Corbin spearing Ambrose through a table in the corner for no cover, followed by a good whipping with a strap.

Dean sends him head first into a chair wedged in the corner and now it’s his turn to give a whipping. The top rope elbow to the floor drops Baron again and Dean puts him on a table. Another elbow puts him through it but Baron grabs End of Days back inside for the quick pin at 11:03.

Rating: B-. This should have been the Wrestlemania match as I’m still not sure what the point was in having Dean win the first match clean. Corbin needs the title a lot more than Dean so this should set up another gimmick match of some kind on a big Smackdown as I can’t imagine they’ll wait for whatever the next Smackdown pay per view is. Good stuff here though.

Here’s Shane McMahon to talk about the Superstar Shakeup. After soaking in the cheers, Shane thanks the fans for being so hospitable over the last week. This Monday’s Shakeup could send anyone anywhere but everyone should be hoping they come to Smackdown, the land of opportunity. Cue AJ Styles to say he doesn’t want to go anywhere. Everyone knows that this is the house that he built and he shake’s Shane’s hands. A tease of more violence seems to be a joke and AJ walks away in what feels like a face turn. 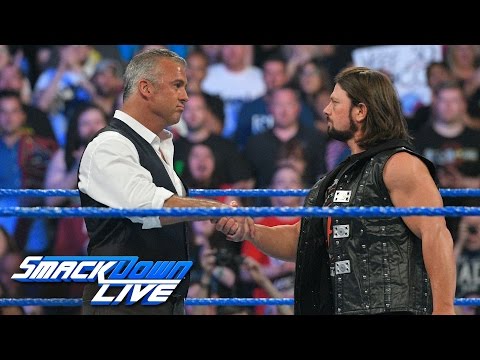 Orton and Rowan get things going with Erick hitting his spinning kick as we take an early break. Tom: “Can Orton and Harper get back in this?” It was one kick man. Back with Bray missing a charge into the corner and Harper coming in off the hot tag. The fans around me thought that would be Harper rejoining Bray and that really wouldn’t have surprised me. Harper is quickly sent outside for a running clothesline from Rowan, setting up a pull on the face.

It’s back to Bray for some slow stomping, followed by a hard right hand for two. Rowan hammers away some more in the corner and rips at the face again. Bray grabs a chinlock before missing a charge, allowing for the tag off to Orton. The DDT looks to set up the RKO but there go the lights and Bray winds up on the ramp. Orton RKO’s Rowan for the pin at 12:13.

Rating: C-. You could really tell the crowd was getting burned out at this point and after so many days, that’s not the most surprising thing. The fact that you could pretty much write the script for this match the second it was announced didn’t help either. Wyatt’s team losing again makes it feel like we’re seeing the same stuff we’ve seen before, which isn’t a good sign after the mess of a title match on Sunday.

After the taping and 205 Live, Nakamura beat Ziggler in about 8:30 with Kinshasa in a pretty standard dark match.

Overall Rating: C+. This was a good show but the Orton vs. Wyatt stuff is almost completely out of steam and the rematch, which is likely taking place at Backlash, is six or seven weeks away. The Dillinger and Nakamura debuts worked really well and….did anything else happen on this show? They can’t possibly consider Rowan returning as a major moment so this is pretty much a two point show that was pretty normal otherwise. 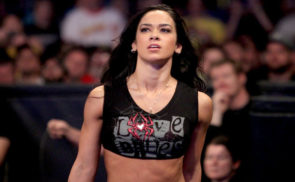