We have a rare taped show from Smackdown this week as the roster is currently over in Europe. WrestleMania Backlash is in just over two weeks and the card could use some spicing up, which we might get this week. If nothing else, things should be interesting as we have our second contract signing in two shows (third if you count this week’s NXT UK). Let’s get to it.

Inside a cage after Zayn has run away from McIntyre twice in a row. Drew Gulak, auditioning to be timekeeper, rings the bell so Sami goes for the early escape. That goes as well as expected and McIntyre sends him straight into the cage. It works well enough that McIntyre does it again but Zayn grabs a sunset bomb to send us to a break.

Back with Zayn rubbing McIntyre’s face against the cage and then kicking said face into said cage. McIntyre gets in a ram into the cage of his own but Sami whips him right back in for a knockdown. The Helluva Kick against the cage rocks McIntyre but he’s fine enough to pull Zayn back down.

An overhead belly to belly sets up a neckbreaker so McIntyre loads up the Claymore. It takes a bit too long though, allowing Zayn to go up and crotch McIntyre for the attempted save. That takes too long too though and it’s a superplex back down, setting up the Claymore to give McIntyre the pin at 10:20.

We look back at last week’s contract signing between Ronda Rousey and Charlotte.

Charlotte doesn’t get embarrassed, but Ronda certainly will at Wrestlemania Backlash. Tonight it’s a Beat The Clock Challenge and Rousey might quit before we even get to the pay per view.

Here is Happy Corbin for Happy Talk, which is now new and improved because Madcap Moss isn’t here anymore. Moss failed at his one job of being funny so now Corbin has to beat him at WrestleMania Backlash. That means Moss will get to show that the only joke is suggesting that he could ever beat Corbin.

Until then, Corbin needs to destroy Moss’ Andre The Giant Memorial Battle Royal trophy, which is his special guest this week. The trophy gets an entrance as we look at Moss’ recent roll. Back in the arena, Corbin wants to wreck the trophy and calls for the sledgehammer….but it’s Moss holding said hammer. The beating is on and Corbin is left laying.

We look back at Ricochet defeating Jinder Mahal and getting a match with Shanky set up for this week.

Shanky, with Jinder Mahal, is challenging and powers Ricochet into the corner to start. The neck crank goes on in less than a minute but Ricochet fights back up. That doesn’t last long as Shanky takes him back down for another neck crank, only to miss an elbow. Ricochet fights up and hits a springboard crossbody. Mahal’s distraction lets Shanky grab him again, only to have Ricochet roll him up for the pin to retain at 3:22.

Post match Mahal yells at Shanky, who walks off.

Raquel Rodriguez says you aren’t nervous when you look like her. Seriously though, of course she’s nervous but she’s going to put on a show.

Cardoza jumps her before the bell and is easily thrown around by the arm. Some fall away slams set up a spinning Vader Bomb but Cardoza is back with a running knee in the corner. Choking on the ropes doesn’t go well for Cardoza as Rodriguez is back with the Chingona Bomb for the pin at 2:00.

A Make A Wish kid is here.

It’s time for the contract signing for the Tag Team Title unification match at Wrestlemania Backlash between the Usos and RKBro. Everyone throws out their chairs and Adam Pearce says let’s just get this done with no problems. The Usos say they don’t have to prove anything to anyone and the only thing they need is bigger luggage when they win the other titles. Riddle says he can’t tell the Usos apart, which isn’t a problem for RKBro.

Randy Orton can’t believe that because he has never had a problem telling them apart. See, you have Jey Uso, who is the right hand man and Jimmy Uso is nothing but a little b****. The fight is on with RKBro getting the better of things but here is Roman Reigns to uneven things a bit.

Now the beatdown is on, with Reigns ripping up the contract and shoving it in Riddle’s mouth….but here is Drew McIntyre to slowly walk down the aisle for the save. With the teams out of the way, McIntyre gets in the ring and sends Reigns flying with a suplex as we seem to have a next challenger.

Post break Paul Heyman comes in to see Adam Pearce and suggests that the Tag Team Title match at Wrestlemania Backlash be turned into a six man tag. Pearce says not so fast, but Heyman says the Board Of Directors might see things differently.

Their respective partners are here too. Baszler takes her down to start but gets pulled into the corner so Naomi can have her fun (as Cole likes to describe it). That doesn’t work for Baszler, who suplexes her down and starts twisting the arm. The Kirifuda Clutch is countered into a Bubba Bomb attempt but Baszler is out again. Naomi fights up and sends her face first into the corner for the pin at 2:23.

Post match the brawl is on with Sasha Banks clearing the ring but Natalya pulls her into the Sharpshooter in the ropes. Baszler stomps on Naomi’s arm for a bonus.

We look back at Butch running away from Ridge Holland and Sheamus, with Michael Cole saying he ran off like a “spoiled, petulant child.” There are missing person posters, plus FAKE PHOTOS of him possibly being in various places.

The six man is official for Wrestlemania Backlash, with no titles on the line.

Before the match, New Day mocks Sheamus and Ridge Holland for losing Butch. Woods dubs Sheamus “Shake It Sheamus” for all of the partners he has had over the years, which does not sit well with Sheamus. Feeling out process to start with Holland using the power to take over. That’s fine with Woods, who sends him outside and hits the flip dive off the apron to drop Holland as we take a break.

Back with Holland running him over and dropping some elbows. Woods’ comeback is cut off without much trouble and the chinlock goes on, allowing fans to keep up the Sheamus chants. Another comeback attempt is countered into a spinebuster but Woods grabs Backwoods for the fast pin at 8:25.

Post match Sheamus wants to show Ridge how it’s done so Kofi Kingston can get in here right now.

Joined in progress with Kofi fighting out of the ten forearms to the chest and hitting a spinning top rope forearm to the head. The Irish Curse hurts Kofi so Sheamus does it two more times before grabbing a reverse chinlock. A powerslam gives Sheamus two but the Brogue Kick is countered into the SOS for two. Sheamus knees him out of the air though and the Brogue Kick finishes Kingston at 2:57.

Post match Holland sends Woods into the barricade and Sheamus loads up the table. The powerbomb through the table leaves Woods laying.

We get Chapter Four of the Lacey Evans Story, focusing on her time in the Marines. She graduated from boot amp but her father didn’t show up to the ceremony because she was never good enough for her family. Evans starts crying as she talks about not having any support growing up and she doesn’t need it. Now she is coming for everyone in the WWE locker room.

I Quit Beat The Clock Challenge: Ronda Rousey vs. Shotzi

I Quit match with Charlotte at ringside. Shotzi bails to the floor to start so the chase is on with Shotzi getting in a few shots on the way back in. Rousey isn’t having that and grabs a suplex, setting up the ankle lock with a grapevine to make Shotzi give up at 1:41.

I Quit Beat The Clock Challenge: Charlotte vs. Aliyah

Non-title I Quit match with a 1:41 time limit. Aliyah starts moving around early and even hits a bulldog. A high crossbody misses though and Charlotte kicks her in the face. The Figure Eight is kicked away though (with Rousey getting in a smirk), meaning Charlotte has to take Aliyah down again. The Figure Eight goes on but time expires at 1:41, meaning Rousey wins.

Result: Charlotte vs. Aliyah went to a time limit draw (1:41)

Post match the staredown is on and Charlotte slowly walks outside….to go after Drew Gulak. The beating is on, including a bell shot to Gulak’s back, to end the show. 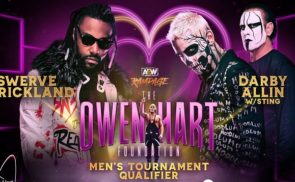