It’s the go home show for Wrestlemania Backlash and the show is mostly set. It seems like we could be in for another of the shorter edition pay per views, meaning there might not be anything else added. That could work out in the end, as some of the matches need a little more seasoning. Let’s get to it.

Here is Jey Uso, who wants an explanation from Jimmy Uso for last week’s disrespect. For now though, Jey brings out Roman Reigns, but first we get a long recap of Jimmy Uso’s return and worries about whose side he was on. Reigns talks about how he respects Cesaro, just like a lot of the boys in the back do. Cesaro is one of the best wrestlers in the world, but Reigns is so much more than a wrestler. Does WWE want Cesaro in his role? Does FOX want that?

We hear about how many World Title matches Reigns has had….and here is Jimmy Uso, in a shirt saying “Nobody’s B****”, to interrupt. Jimmy says Jey is out here acting like Reigns’ b**** but he has a shirt waiting for him in the back whenever Jey gets his head on straight. Yeah Reigns is the head of the table, but he isn’t the whole family. Reigns asks if Jimmy thinks he (as in Reigns) can beat Cesaro, but Jimmy doesn’t think so.

Jimmy says he and Jey could be the head of the table if they won the Tag Team Titles and Reigns lost the Universal Title. That sends Reigns into a mixture of anger and laughter before asking if Jimmy can beat Cesaro. Jimmy calls Cesaro out as Reigns chuckles behind him. As Jimmy asks Reigns if that was good, here is Cesaro to interrupt. Cesaro keeps it simple by saying he accepts the challenge and promises to take the title on Sunday.

Jax and Baszler are defending and have Reginald in their corner. Jax hammers on Tamina to start so it’s off to Baszler, who gets headbutted across the ring. A catapult into the Samoan drop plants Tamina but Reginald’s distraction means no count. That’s enough for the ejection, allowing Nia to Samoan drop Tamina into the barricade. Back from a break with Tamina down and Jax ramming Natalya head first into the mat.

The running hip attack in the corner crushes Natalya again but she avoids a charge, allowing the hot tag to Tamina. House is cleaned in a hurry until Shayna twists Tamina’s ankle around. Tamina shoves Jax off the ropes and Natalya takes Baszler outside for a German suplex into the barricade. Back in and Jax hits Natalya with the Samoan drop….and then just lays there so Tamina can hit the Superfly Splash for the pin and the titles at 9:28.

Post match Natalya and Tamina talk about fighting for their dreams and never giving up. Pyro goes off to celebrate.

Here is Apollo Crews to present a medal of honor to Commander Azeez, who is standing on some steps in the ring. Crews praises Azeez but here is Big E. on the screen to interrupt. He wants the Intercontinental Title, but here is Sami Zayn, to say he wants the Intercontinental Title. Cue Kevin Owens to go after Zayn and the big brawl is on, with Big E. being left standing tall as Crews and Azeez run.

Dominick and Robert Roode are here too. Feeling out process to start with Mysterio picking up the pace. Ziggler shoulders him down and starts the trash talk, including saying Rey doesn’t have it anymore. Mysterio manages to send him outside though and there is the big dive to take us to a break.

Back with Rey missing a springboard crossbody so Ziggler can take over again. There’s a reverse powerslam for two on Rey and we hit the chinlock with the arm cranked back. The bow and arrow stays on the back but Rey fights up and knocks him away. Rey gets caught on top but manages to knock Ziggler down again, only to miss the 619. Ziggler is back with the Fameasser for two and tries a slam, which is reversed into a small package to give Rey the pin at 13:20.

Cesaro talks about knowing he could be World Champion for so long now and has been telling himself that he knows he can. He isn’t bred for this business like Reigns, but he knows he can beat Reigns.

Rey and Dominick Mysterio promise to win the Tag Team Titles. Dolph Ziggler and Robert Roode come in to call Dominick a baby, but Dominick says they’ll be calling him baby champ.

Here is Bianca Belair to talk about how everyone has doubted her for her entire life but she doesn’t listen to them. We see her brawls with Bayley, who pops up on the screen to laugh at Belair. Bayley isn’t here in the building because of Belair attacking her last week, but she’ll take the title on Sunday. Belair promises to be the EST and Bayley laughs a lot so Belair brings up the Bellas throwing Bayley down the ramp at Wrestlemania. You know, the night where Belair was in the main event and winning the title. Bayley promises to take the title and glaring ensues.

Nakamura promises to be the only king who survives. Corbin says he can beat Nakamura in a suit and watch, so imagine what he can do now. Nakamura takes him into the corner to start but gets choked on the ropes for the effort. The rapid fire kicks, including one to the head, put Corbin down. Back up and End of Days is countered, allowing Nakamura to grab the triangle choke. Corbin can’t powerbomb his way to freedom but he can stack Nakamura up for the pin at 3:04.

Post match Corbin puts the crown on but gets taken down by Kinshasa. Nakamura steals the crown, despite losing clean a few seconds ago.

Apollo Crews and Commander Azeez come in to interrupt Adam Pearce and Sonya Deville. He isn’t happy with the interruptions earlier but Sonya says be nice or Pearce might make him face everyone at once. Pearce says we’ll do that next week, with Crews defending against Big E., Sami Zayn and Shinsuke Nakamura.

Aleister Black talks about how his father taught him about the cruelties of life, which takes us to Chapter Three: The Lesson. His father taught Black that he is a cruel man but he needed to fight through it. Black could teach us that, but we are spectators instead of participants.

Jimmy Uso thinks the Usos are the hottest tag team ever, or at least they can be if Roman Reigns will stay out of it. Now he’s going to get it against Cesaro.

Jimmy goes for the arm to start and gets dropkicked down (Cesaro: “WELCOME BACK UCE!”). Back up and Jimmy teases a knee injury, allowing him to kick Cesaro in the ribs and take over. We hit the chinlock for a bit, with Cesaro powering up and hitting a suplex. Cesaro’s charge goes shoulder first into the post though and Jimmy clotheslines him to the floor. There’s the suicide dive but Jimmy grabs his knee as we take a break.

Back with Jimmy superkicking Cesaro out of the air for two. Jimmy goes up top but Cesaro catches him with an uppercut, setting up the top rope superplex. That’s enough for Cesaro to go out to the floor, with Cesaro following with a running flip dive. Cesaro throws him back in but here is Roman Reigns to jump Cesaro for the DQ at 9:33.

Post match Jimmy yells at Reigns for making it all about himself. Jimmy walks away from Reigns and Jey Uso but Reigns follows him, saying no one cares about this. It’s all about the big money matches, but Cesaro jumps Jey in the ring. Reigns goes in and the Usos have to make the save, leaving Cesaro to Neutralize Jey twice in a row to end the show. 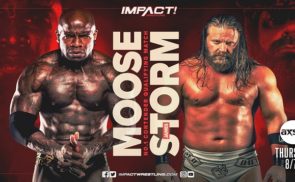 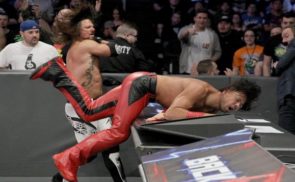