We’re still in Japan and back in February with more matches from Honor Rising 2016. At this point you almost have to expect Ring of Honor to skip most of the Dallas stuff and just do a new set of TV tapings in May with the New Japan guys again. There won’t be anything major in storyline terms here but hopefully the action will be good. Let’s get to it.

Okada is the IWGP World Champion but has since lost the title to Naito, who is kind of a loner. Lethal and Okada start things off by trading wristlocks.. An early Lethal Injection attempt is countered but Jay ducks the Rainmaker to get us to a standoff. Naito doesn’t want to tag in and we take a break.

Back with Naito tagging in to jump over the apron and dropkick Naito for two. A quick Codebreaker allows for the tag off to Okada who eats a tornado DDT for his efforts. Lethal adds a roaring elbow but accidentally superkicks Naito, allowing Okada to dropkick him down. The hot tag brings in Yoshi for a neckbreaker and Blockbuster for two each. The Book of Truth is brought in to poor results but Naito’s goon Evil (formerly known as Watanabe) shoves Yoshi off the top, setting up the Lethal Injection for the pin at 12:56.

Naito reads the Book of Truth and then uses it to pound on Yoshi. Jay shakes his hand post match to imply a future partnership.

Kushida’s IWGP Junior Heavyweight Title isn’t on the line. It’s a fight over a top wristlock to start as the announcers talk about the referee’s career. Kushida gets in an early Hoverboard Lock but Kazarian bails to the ropes. That’s fine with Kushida as he rides Kazarian on the mat to take us to a break.

Back with Kazarian snapping the throat across the ropes and getting in the slingshot DDT. We hit the choking with Kushida pointing to his throat as he can’t breathe. A Backstabber gets two on Kushida as Kelly says we’ll be seeing more Honor Rising stuff for weeks to come. Kushida gets in a dropkick to send Kazarian out to the floor and there’s a big flip dive to take him out again.

Back in and it’s off to the submission attempts so Kazarian goes American with a rake to the eyes. An electric chair into a rollup gets two as the announcers talk about Japanese baseball. Kazarian loads up the Flux Capacitor but Kushida grabs the Hoverboard Lock to slam Kazarian down to the mat. Another Hoverboard Lock makes Kazarian tap at 9:37.

The Briscoes get into shenanigans on the streets of Tokyo.

Elite is a subset of Bullet Club comprised of Kenny Omega and the Young Bucks. The Elite is sent out to the floor and Shibata and Omega fight past the barricade. The Bucks try stereo sunset flips and get caught in matching cross armbreakers. Shibata puts Omega in one as well, only to get powerbombed onto his partners. Omega is left alone in the ring so he dives over the top to take everyone down.

We take another break and come back with the Elite taking turns choking Fish. A tag match breaks out of all the fighting with Nick telling Fish to suck it several times. Bobby suplexes Nick into Matt and makes the tag off to Kyle while Shibata is nowhere to be seen. Chasing the Dragon is broken up and it’s off to Shibata vs. Omega for the big slugout. Shibata gets in a choke and the Bucks can’t break it up.

A double superkick puts Omega down to one knee and the triple version gets two. Everything breaks down and Omega throws Shibata off a tornado DDT, setting up the superkick party. Everyone kicks everyone until Kyle counters the One Winged Angel into a guillotine choke. Matt sprays something in Kyle’s eyes though and it’s the One Winged Angle to put O’Reilly away at 10:16.

Result: Elite b. Katsuyori Shibata/ReDRagon – One Winged Angel to O’Reilly (10:16) 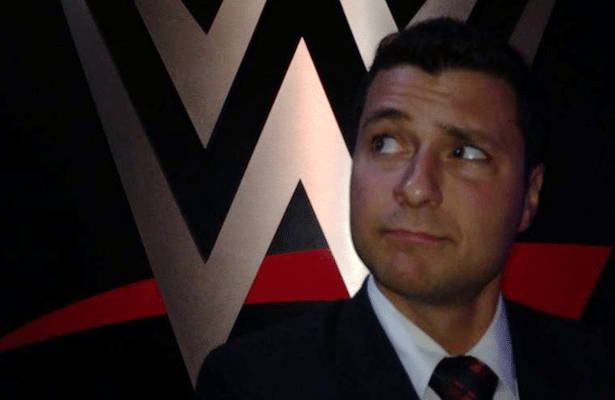